A two-headed compound obtained from soil bacteria may hold the key to developing the next generation of antibiotics, researchers in the UK report. The compound, called simocyclinone, was found to shut down crucial bacterial enzymes in an unusual two-pronged attack.

It is hoped the research could inspire the development of potent new antibiotics, which could also be less vulnerable to resistance developing against them.

’The emergence of antibiotic-resistant bacteria such as MRSA has created a strong need, both clinically and sociologically, to find new antibiotics,’ says Anthony Maxwell, who led the research at the John Innes Centre in Norwich, UK. ’To do this, we need to identify a good target - something inside the bacteria that you can knock out, causing it to shut down.’

A common target is DNA gyrase, an enzyme that is not found in human cells, but is essential to bacteria as it unwinds double-stranded DNA, allowing them to duplicate. Two popular groups of antibiotics, the quinolones and aminocoumarins, already target gyrase and bind to specific pockets that block its action. Since resistance is growing towards these drugs, discovering alternative binding sites will have great value in the future.

’We found a third angle of attack in simocyclinone,’ Maxwell told Chemistry World. ’This compound simultaneously targets two binding pockets that until now were unknown.’ The two binding pockets are distinct but separate, and although the individual pockets only attach weakly, together the binding is very strong, suggesting that the mechanism could be highly potent. 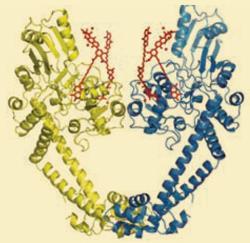 Simocyclinone was originally isolated from soil bacteria, which is an important source of new antibiotic agents. ’Soil bacteria are continually at war with one another, and around three-quarters of modern antibiotics originated from them,’ Maxwell explains. However, most of these compounds are not immediately effective. Simocyclinone has not been considered for clinical use as it struggles to penetrate cells effectively.

Now that the mode of action is established, the researchers hope that others will be inspired to develop new compounds that exploit this two-pronged mechanism.

Peter Leadlay, who develops antibiotic compounds at the University of Cambridge, UK, agrees that simocyclinone-based antibiotics have great potential and should be easy to mass-produce. ’The simocyclinones are highly feasible objects of total synthesis, although fermentation would be competitive, as has been extensively done for other antibiotics such as aminocoumarins,’ Leadlay told Chemistry World.

A further advantage of these types of antibiotics, Maxwell suggests, is that resistance to them could be slower to emerge, since the bacteria might require simultaneous mutations in both pockets in order to develop resistance.

But Leadlay thinks it may work differently. ’I think the likelihood of resistance developing is intrinsically no different with two binding pockets instead of one,’ he says. Instead, he points to the dual-binding site being much more powerful against bacteria. ’A highly potent antibiotic will be more likely to kill not only the pathogen targeted but also a mutant arising through a single mutational step,’ he says.