A collaboration between theoreticians and synthetic chemists in the US has led to a new understanding of metal-organic frameworks (MOFs) and some promising new compounds for methane storage.

MOFs are porous structures made of separate building blocks, so their chemical and structural diversity is enormous. While that variety has led to lots of potential applications, including methane storage in fuel tanks, it also means that finding the optimal MOF for a particular application is much like looking for a needle in a haystack. 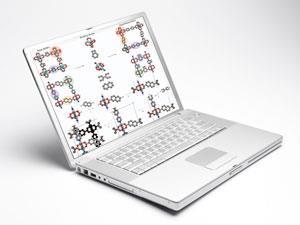 ’We thought, "Why don’t we just pick the winners?"’ says synthetic chemist Omar Farha of Northwestern University Illinois. And so Farha’s colleague Chris Wilmer screened a library of 102 building blocks that fit together to make nearly 140,000 different MOFs. To date, says Farha, only about 10,000 MOFs have been made and reported in the literature, so that’s a huge increase and could save synthetic chemists years of trial and error.

’At the beginning of the project we really didn’t know what building blocks or what MOFs were the best for methane storage but there was a bit of a feedback loop,’ explainers Wilmer. ’We learned a lot from this study,’ he says. For example, MOFs with methyl and ethyl functional groups and MOFs with the 80 per cent free volume were typically top candidates for methane storage. ’Now, when we design new materials, we follow these guidelines.’

Omar Farha picked one of the best candidates and showed that not only did the measured methane absorption fit well with experimental predictions, it also beat the current record holder with an adsorption of 213cm3 of gas per cubic centimetre of MOF. This already exceeds the US Department of Energy’s storage target of 180cm3/cm3  for a fuel gas.

So is that it, can all chemistry now just be predicted by computer? Well, not quite. ’If you think about it from a chemist’s point of view, intuition is still valuable,’ Farha says. ’The program will generate everything you want but sometimes you have to step back and say "Is that reasonable? Can we make it?" The idea is to be practical at the same time.’

But screening does have huge benefits. ’We can make porous MOFs a lot faster than we can characterise their gas adsorption properties. Therefore, in silico screening of MOFs is a very attractive proposition that could rapidly advance the commercial development of MOFs,’ explains Mike Zaworotko of the University of South Florida, US. ’In short, if surface area and gas uptake at selected conditions can be calculated then the challenge of finding the perfect but elusive MOF for carbon capture or methane storage becomes much more tractable.’

However, the next step is to be able to model and predict the selectivity of the MOF for more complicated gases, Wilmer says, and this will be particularly important with regards to the adsorption of CO2.