US team generate 55 000 nanoscale images of Thomas Jefferson to show the potential of their molecular ink pen.

Making 55 000 nanoscale images of Thomas Jefferson might sound like an eccentric art project, but this is the first demonstration of a new technique that harnesses the power of thousands of nanoscale pens working in synchrony.

Chad Mirkin and his colleagues at Northwestern University in Illinois, US, drew their Jeffersons using a microscopic pen that deposits dots of a molecular ’ink’ onto a gold substrate in a controlled, aligned pattern. They have called the technique parallel dip-pen nanolithography (DPN). 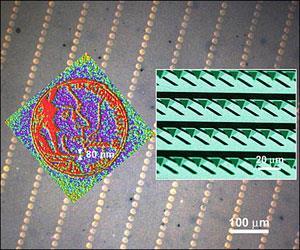 On the left, each image of Thomas Jefferson is made of a series of 80-nanometre dots. On the right, an electron microscope image of a portion of the 55,000-pen array. The background shows some of the miniature images of a US nickel, each circle measuring just twice the diameter of a red blood cell.

Mirkin’s research group devised and patented the original DPN tool in 1999. They used a single atomic force microscopy (AFM) tip to ’write’ 30nm-wide lines of alkanethiol molecules onto a gold substrate. In the same principal as a quill and ink, the pen was dipped into the alkanethoil which was then written onto the gold surface.

Dubbed as the world’s smallest pen, this provided a new means for the fabrication of nanoscale devices.

Their technology has now been taken several thousand stages further with the development of a two-dimensional DPN array made of 55 000 pens, which can simultaneously create 55 000 complex patterns made up of dots just 80 nanometres across.

Although DPN has proved to be a very successful research tool, Mirkin told Chemistry World that the original system was criticised for its lack of throughput. ’We’ve now pushed the capability of this to a new milestone. You can literally print structures exactly where you want them,’ he said.

’We’ve scaled this up from 100 square micrometres to a square centimetre, so it’s a tool for any researcher to get a pattern of material onto a substrate quickly and at low cost,’ Mirkin added.

Parallel DPN could be applied to a number of research fields to build miniscule devices, Mirkin said. He also believes that the technique could help scientists to quickly generate and screen huge numbers of different combinations of molecules in combinatorial libraries.

1 July 2005: Minding the nanogaps aboard a molecular circuit

Fully-functioning molecular circuits could be a step closer thanks to a new nanofabrication technique.

Philip Ball sizes up the latest developments in nanotechnology.