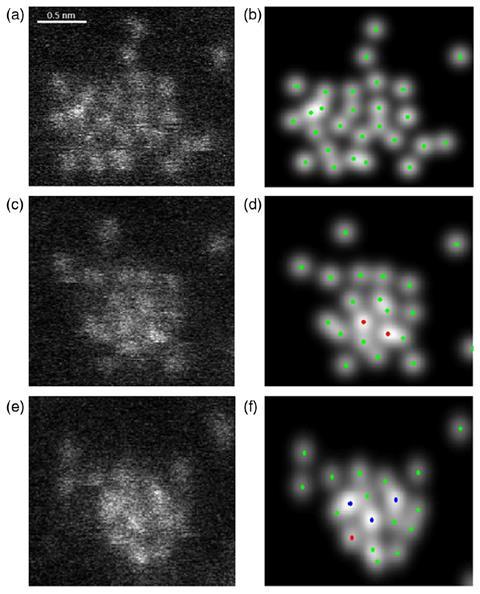 A material’s exact composition and shape determines its physical properties. Even just a few stray atoms on a surface can make a difference, for example when it comes to a material’s catalytic properties. Transmission electron microscopy (TEM) can visualise these nanoscale details by illuminating a sample with an electron beam.

But many materials quickly degrade under the electron onslaught. To avoid radiation damage, scientists tune down the beam intensity, which also lowers the contrast. Interpreting these noisy images usually requires researchers to make assumptions that might lead them to misassign structures.

A statistical model, developed by researchers from Belgium, the Netherlands and the UK, promises to resolve fuzzy TEM images down to single atoms – even light ones that only weakly scatter electrons and are therefore hard to spot. At the same time, the method removes human bias from the equation.

Unlike other methods, the model analyses the TEM image as a whole rather than looking at each pixel individually. It tries to fit different arrangements of atoms to the image and then figures out which number is the most probable.

Within an hour, the method revealed details of a strontium titanate crystal, although it took long longer – 11 hours – to find the hexagonal graphene lattice in an even noisier TEM image. The probability count can also resolve individual atoms at the edge of a gold nanorod that were invisible in the original image.