A cheap, new catalyst that generates hydrogen from sea water has been developed that displays high catalytic activity and stability

A new catalyst that generates hydrogen from sea water has been developed by scientists in the US. This new metal-oxo complex displays high catalytic activity and stability, whilst being low cost, the researchers say.

Hydrogen is very attractive as a clean source of power. Currently, it is produced by natural gas reforming - where steam is reacted with methane in the presence of a nickel catalyst to form hydrogen - but this method produces the greenhouse gas carbon dioxide.

Jeffrey Long and colleagues from the University of California, Berkeley, prepared a simple molybdenum-oxo complex that can serve as an electrocatalyst, reducing the energy required to generate hydrogen from water on a mercury electrode. As an abundant metal, molybdenum is much cheaper than precious metal catalysts where the costs associated with large scale hydrogen production would be high. 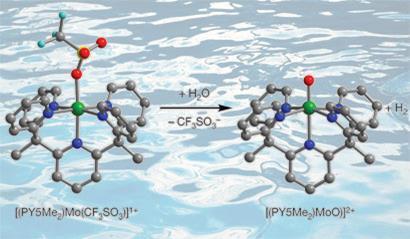 Long explains that the stability of the catalyst is due to a ligand that bonds to the molybdenum in five places (pentadentate) making it a very strong complex. ’The molecule is very robust and is stable in aqueous conditions for long periods of time so we don’t see degradation of the catalytic activity over three days of running the reaction,’ he says.

Significantly, Long’s catalyst is also stable in the presence of impurities that can be found in the ocean, meaning that sea water can be used without pre-treatment. The team used a sample of California sea water in the system and found the results to be similar to the results obtained for water at neutral pH. In addition, no other electrolyte is necessary when using sea water, which helps reduce costs and removes any need for organic acids or solvents that could degrade the catalyst.

’The work clearly demonstrates that the molybdenum-oxo complex explored shows good catalytic activity, with at least an order of magnitude higher turnover frequency [the speed at which a catalytic cycle is completed] than alternative catalysts quoted,’ says Bruce Ewan, an expert in hydrogen production and renewable energy at the University of Sheffield, UK.   ’This new catalyst also opens up new possibilities as a catalytic agent in other proton reducing scenarios,’ he adds.

Long and his team hope to develop this system so that ’in the future a catalyst like this could be used in conjunction with a solar cell to produce hydrogen,’ he explains. The team is now working on modifying the catalyst to reduce the potential at which the electrochemical reaction proceeds and make the system more efficient.