US scientists have found a way to clean up the production of palladium nanoparticles - doubling their performance as catalysts for fuel cells. The research should allow palladium to replace platinum in certain types of fuel cell, making them more economical.

Fuel cells are hoped to be an effective way to make long-lasting batteries for laptops, mobile phones, or even vehicles of the future - but their widespread use is being held up by the high price of the components used.

The most expensive part is the metal-based catalyst, on which the fuel cell reaction takes place. The current metal of choice is platinum, which comes with a hefty price-tag. Palladium is around five times cheaper and has similar range of catalytic abilities, being directly above platinum on the periodic table - but issues with reliability have held it back.

’Palladium has not been fully exploited in the field of fuel cell catalysis,’ says Vismadeb Mazumder, who worked on the project with Shouheng Sun at Brown University, Rhode Island, US.

One of the reasons for this, Mazumder explains, is that the catalyst in fuel cells is often made from metal nanoparticles in order to maximise their surface area and effectiveness. ’The trouble with palladium nanoparticles,’ he says, ’is that the way they are made kills their catalytic activity.’

During production, in order to keep the palladium nanoparticles separate and stop them clumping together, strongly-binding ligands are typically added to the mix. But these are not easy to remove and block some of the active surface of the catalyst.

To solve this problem, Mazumder hunted for a different ligand, eventually settling on a process that separates the particles with weakly-binding oleylamine - an 18-long carbon chain tipped with an amine group. Once mounted on a surface, acetic acid can be used to remove the bulk of the oleylamine, leaving an exceptionally clean catalyst with around 40 per cent more reactive surface area.

The team then examined the new particles by putting them under fuel cell conditions, with formic acid converted into carbon dioxide and water, producing enough electricity to feed the most power-hungry laptop. It then underwent rigorous testing, with 1,500 charge-recharge cycles over 12 hours. 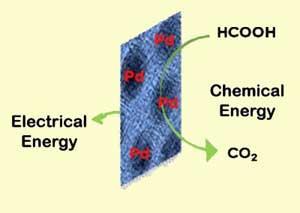 The cleaner particles proved to be twice as active as the commercially available palladium particles - and four times more stable, putting them on level ground with platinum-based catalysts for a fraction of the price.

But Mazumder admits that even palladium isn’t that cheap, so the team are already looking for ways to combine palladium with cheaper metals to find a good balance between performance and price.

’This is a promising advancement in the development of non-platinum catalysts,’ says Dan Brett, a fuel cell expert at University College London. ’But it will be interesting to see if the performance observed for formic acid can be reproduced for other fuels such as methanol or hydrogen, which contain carbon monoxide at concentrations detrimental to the performance of conventional catalysts.’