Profile: The future of French science

Chemist Alain Fuchs talks of his hopes and fears in his new role as president of CNRS, France's enormous research organisation

Alain Fuchs, the newly installed president of France’s National Centre for Scientific Research (CNRS), admits he has one major concern about his new role.

’My fear is to lose sense of what is going on in the lab,’ says Fuchs, previously head of French chemistry institute Chimie ParisTech and an expert in thermodynamics and nano-materials.

Finding time to pursue his own research will not be easy following his appointment as CNRS president a month ago.

Directing the agency, which has an annual budget of

3.4 billion (?3 billion) and 33,600 employees scattered across 10 institutes and all scientific fields, will be more than a full-time job during the four years he will be in office.

Fuchs, however, says he wants ’to keep one eye on research.’ He will try to meet once a week with his Chimie ParisTech research team, even if the meetings have to take place at weekends. ’Talking face to face about chemistry is something I need,’ he says, adding that keeping in touch with research will make him a better CNRS president.

CNRS has essentially ruled French science since its establishment in 1939. But this is changing as major reforms spearheaded by President Nicolas Sarkozy under the so-called University Liberties and Responsibilities Law, passed in 2007, shift more power to universities. ’This is a very important law,’ says Fuchs, who will be intimately involved in this controversial ongoing process, which is not supported by all in the French scientific community. 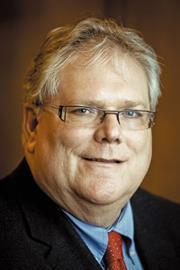 Fuchs explains that although CNRS researchers and university scientists work in the same laboratories, universities have had little input into research issues such as selection of scientists and research focus. ’There is a lack of partnership and discussion today between universities and CNRS,’ says Fuchs.

Among his major goals as CNRS president are opening up lines of ’strategic communication’ between CNRS and universities, and shifting more research decision-making authority from CNRS to universities.

’The idea is not to make CNRS disappear, but to bring it into a bigger partnership with universities,’ he says. ’We are not used here in France to having very strong universities like in the US, UK, Switzerland and Germany.’

A major goal of university reform is to transform around 10 universities into top international research centres. The plan is similar to the so-called Excellence Initiative in Germany, designed to create a German Ivy League of universities to compete globally with the likes of Oxford in the UK and Harvard and Stanford in the US.

In a clear signal that the current government expects CNRS to share power with universities, the agency’s previous dual leadership structure - with a president and a director general - was changed simultaneously with Fuchs’s appointment. The director general position was eliminated, leaving Fuchs alone at the top.

The mood of the scientific community toward Sarkozy and his reforms seems to be mixed, Fuchs says. On the one hand, researchers are happy with the generosity of the president, who in December announced a

35 billion increase for research funding. But Fuchs concedes also that there is ’a little bit of fear. It is always true that change induces fear.’

Despite the changing landscape in French science, Fuchs says he did not hesitate a millisecond when the call came asking whether he would be interested in being put on the short list for the CNRS presidency. ’It will be extremely interesting,’ he says of his new role. ’And, of course, very difficult.’

While admitting that his appointment is ’certainly a nice message’ to chemists, he emphasises, ’I am here as a scientist to run all disciplines,’ but adds: ’of course, I am still a chemist in my heart.’