Programmable nanostructures based on ribonucleic acid (RNA) could be used as vessels for shipping therapeutic molecules into cells, according to US scientists. The researchers showed by experiment that RNA assemblies designed on computers were stable and could accommodate multiple siRNAs - short RNA fragments with broad therapeutic potential as regulators of gene function.

RNA is a present naturally in large quantities in the cell. Synthetically produced RNA is therefore an attractive candidate for bio-compatible therapeutics. Through computer-aided design, however, it is possible to achieve structures that would never be found in nature. Researchers at the University of California, Santa Barbara and National Cancer Institute in Maryland created self-assembling hexagonal nanorings of RNA - structures that lead researcher Luc Jaeger describes as ’quasi-digital’.

Generating the six-sided structures required careful selection of RNA sequences in order to avoid the particles self-assembling into more readily formed but less thermodynamically stable five-sided rings. Jaeger’s team adapted structural elements from bacterial RNA known as ’kissing-loop complexes’. Each side of one of their 15nm hexagons is a RNA unit ending in a loop that, at a corner of the hexagon, meets or ’kisses’ another loop. The angle at each ’kiss’ is 120?, thus forming a perfect hexagon. 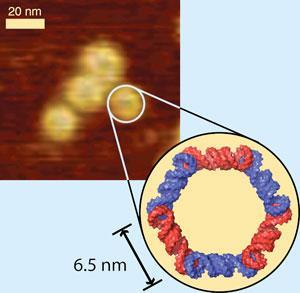 The nanorings could be of use in gene therapy

The team armed their structures with six siRNA molecules - one on each side - and showed that an enzyme called Dicer was capable of breaking up the packages to release the individual siRNA components. Theoretically, naturally occurring Dicer would do this job inside cells. In this way, Jaeger says, he envisages targeting several different genes, or sites within the same gene, at once.

’I think they did a good job,’ says Peixuan Guo, an expert in nanomedicine at the University of Cincinnati, US, adding that the group combines its computational and experimental expertise well. But Guo says stability is key and thinks further chemical modifications would be required to make the nanoparticles stable inside the body. For Jaeger, however, the notion of stability is complex. ’Living systems depend on molecules that are not eternal,’ he says. ’I think this is a very important feature of biology that needs to be kept in mind for eventually acting on cells in non-harmful ways. What we’re doing is taking advantage of some of the incredible properties of natural biopolymers to generate new therapeutics that will be really human friendly.’