Protein-free and low sugar – not a new diet, a new vaccine

A simpler synthesis and fewer jabs means benefits for chemists, clinicians and patients 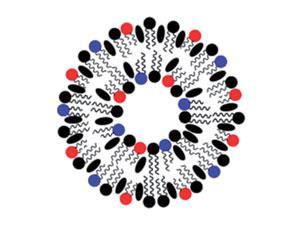 The vaccine ingredients self-assemble into a liposome

A Streptococcus pneumonia vaccine with fewer sugar units and no antigenic protein is not only easier to produce but could also induce a superior immune response to the vaccine currently in clinical use.

Cells are sugar coated; bacteria, parasite and tumour cells often have different carbohydrates to host cells on their surface. Since the immune system recognises these, vaccines can be made of carbohydrates. However, to gain long-term immunity, a protein that provokes an immune response by activating T cells is usually included too. The protein is covalently attached to the carbohydrate, but synthesis of such vaccines can be tricky.

Shenglou Deng, of Brigham Young University in Utah, US, and co-workers, made two main changes with their new vaccine: instead of using the whole sugar on the pathogen’s coat they took a small section of it – an oligosaccharide – and instead of joining this to a protein, they combined it with a lipid that targets only one type of T cell – natural killer T (NKT) cells. Two long chain lipids, to give the vaccine structure, were also added to the vaccine’s ingredients.

Self-assembly has been compared to shaking Lego blocks in a bag and pulling out a castle – in this case the lipid Lego self-assembled to give a spherical lipid bilayer called a liposome, with the oligosaccharide that triggers the immune response sticking out from the surface.

As well as useful synthetic considerations, Deng's vaccine may take fewer doses to be effective. Steven Porcelli, an immunologist at Albert Einstein College of Medicine in New York, US says ‘based on the team’s findings, this approach seems to be working extremely well in healthy young mice, in which it stimulates antibody responses quickly’.

High levels of IgG antibodies were produced by the mice after immunisation with only one injection of the liposome vaccine in comparison to the clinically used Prevnar vaccine that needed two vaccinations to be effective. Prevnar is given to children to protect them against Pneumococcal meningitis and pneumonia but the recommended dosing of Prevnar requires four vaccinations, which can not only be challenging for patients who are not keen on injections but also those living in rural areas or the developing world.

Given further work, Deng sees a bright future for the vaccines: ‘oligosaccharides unique to a large number of different types of bacteria have been identified. Simple, liposomal vaccines targeting many types of bacteria could, in theory, be generated’.