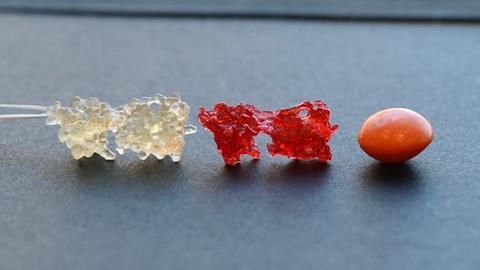 Students can identify protein shapes with their mouth – a discovery that could help blind students understand their complex shapes when the descriptions in books and on screens may be difficult to convey.

‘One of the proteins we study, hexokinase, bites down on sugar and patches a phosphate group to it – so it opens up and bites down, sort of like Pac-Man,’ explains Bryan Shaw of Baylor University in the US. ‘We always teach this to students with pictures, but here we’ve made bite-sized models of the protein open and the protein closed, and we’ve sought to see if students can detect these structural changes with their mouth.’

As well as gummy sweets made mainly from gelatin, the researchers also created models out of resin that can be sterilised in an autoclave and reused. They found students could identify the protein shapes in their mouth about 85% of the time, which was about the same as their accuracy of identifying the shape from a much larger handheld model. Although the fingertips have a greater density of nerve endings than the tongue, they are about as sensitive as each other because the tongue is much more flexible and agile, Shaw explains. 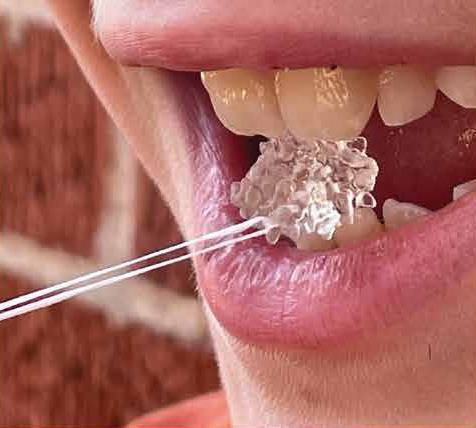 The tiny sweets could make learning more inclusive to blind and visually impaired students. ‘My biochemistry textbook has 1100 pictures and you can’t have 1100 baseball-sized [handheld] models of something,’ Shaw says. He hopes the edible models can help them learn chemistry – a field of study often denied to them because it is perceived as too difficult or dangerous to excel at without good vision.

Shaw’s team is now working with students at the Texas School for the Blind and Visually Impaired in Austin to improve the protein models, and perhaps to expand the range of bite-sized objects that can be identified by mouth into other types of molecules and other shapes, such as those found in higher mathematics. They’re also working to make chemistry laboratories more accessible to blind and visually-impaired people, ‘so that they can do actual experimental chemistry using robots and accessible equipment’, Shaw says.

Chemist Mona Minkara at Northeastern University in Boston, US, has been blind from an early age. She maintains a list of tools and techniques she uses in her scientific work, and the tiny protein models are unlike anything else, she says. ‘This is awesome, it’s thinking outside the box, and it’s the kind of thinking that we need more of as we move forward.’

Minkara has been in contact with Shaw and is keenly awaiting a mail delivery of the models. ‘I’m really excited to see how much I can discern from their structure when we get them.’

The perception that blind people shouldn’t do chemistry has little to do with the realities of the work. ‘I’m not a lab-bench chemist, I’m a theoretical chemist, I model these proteins on a computer – but I was discouraged from that, even though there’s no danger at all,’ Minkara says. ‘It’s a disadvantage to the community to block people who have a love and passion for it from entering, because when you do that you’re going to limit the possible solutions.’