Researchers in the Netherlands have identified a protein that might help explain why promising microbicide gels are yet to prove effective against HIV transmission.

Teunis Geijtenbeek and colleagues at VU University (Vrije Universiteit) in Amsterdam discovered that a protein that was thought to increase HIV transmission actually prevents transmission. The protein, called Langerin, is expressed on the surface of immune cells called Langerhans cells. Langerin captures or binds to the HIV-1 virus, explained the researchers, tagging it for destruction inside the cell. 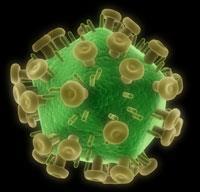 ’Langerin-bound HIV-1 is taken up by the Langerhans cell and destroyed inside - it’s a bit like the cell eating the bound virus,’ Geijtenbeek told Chemistry World.
One previously developed microbicide gel,  Ushercell, underwent clinical trials in Africa earlier this year. These were quickly halted when it was discovered that use of the gel actually increased the rate of HIV transmission.

Geijtenbeek thinks that microbicides which activate immune cells might interfere with the production of Langerin. This could be an explanation for such poor results.

’Some microbicides might activate Langerhans cells. They are very sensitive and easily activated. But activated Langerhans cells express lower levels of Langerin, reducing its protective function, so the cells become infected and are able to transmit HIV-1 to T cells,’ said Geijtenbeek.

HIV-1 attacks the immune system by infecting and destroying T-cells, a group of white blood cells that play a central role in the body’s immune response. The aim of microbicides is to counteract this by stimulating immune cells in the mucous membranes to trigger an early response to the virus and stop it from attacking the T-cells. Geijtenbeek’s team claim to have found the Achilles heel in this approach.

George Usher, CEO of Polydex, the Canadian firm that produced Ushercell, cautioned that the potential of this research was not a forgone conclusion. ’Microbicides must be cheap and easy to make; the large population at risk is in developing or poor countries,’ he told Chemistry World.

But Geijtenbeek suggests that his research could help to identify the more promising candidates from microbicides currently being developed. ’Microbicides should be tested to check if they interfere with Langerin function,’ he said. ’We are currently investigating whether we can enhance its function by increasing the amount expressed on the surface of Langerhans cells. This might be a very real possibility but it will take time.’