US researchers have discovered a new chemical that carries messages rapidly between cells - the first for more than 20 years. But unlike conventional signalling molecules, such as the neurotransmitters found in nerve cells, this is a far simpler chemical entity: it is the humble proton.

Erik Jorgensen and colleagues at the University of Utah wanted to understand the mechanism underlying the rhythmical contraction of the digestive muscles of the tiny round worm C. elegans, an organism that is a popular model for biological studies.

By screening for mutant worms where muscle contraction is impaired, Jorgensen’s team identified the pathway by which the intestine signals to the surrounding muscle - a signal that the researchers showed is not transmitted by nerve cells.

Every 50 seconds a wave of calcium ions is released from internal storage compartments in the cells of the intestine. The calcium ions activate proteins in the gut wall that act as proton pumps - catapulting protons out of the cell.

The protons then diffuse through the worm until they meet a receptor protein on the surface of muscle cells surrounding the worm’s gut. ’This protein is very similar to conventional neurotransmitter receptor proteins,’ Jorgensen told Chemistry World. Each proton docks with a site on the receptor, which then open up a hole that allows vast amounts of sodium to flood into the muscle cell. This pulse of electrical current ultimately causes the muscle to contract.

’Direct communication between the intestine and the muscle without the mediation of nerve cells is a big surprise,’ said Jorgensen. ’The fact that the signalling molecule is a proton is also a surprise. This is the first fast-transmitter that I know of that has been discovered in the last 20 years.’ 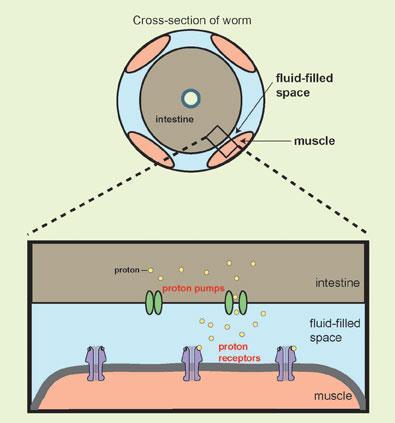 Protons are pumped out of the intestine and then bind to receptors on the surrounding muscle. The receptors open to form holes in the muscle, allowing ions to flow into the muscle so the muscle contracts

Proton-activated proteins that allow ions to flow into cells have also been found in mammalian brains - as have sodium-hydrogen exchange proteins. ’We have demonstrated that protons can act as transmitters, so this could cause a rethink of the role of these proteins in the brain,’ Jorgensen said.

Adrian Wolstenholme of the University of Bath, UK, studies biochemical signalling in C. elegans. ’The significance of this work is not just that they have shown that protons can act as intercellular signals - proton-sensitive and proton-gated ion channels have already been identified - but that they have found so many of the components required for ’protonergic’ transmission and placed it in an important biological context,’ he told Chemistry World. ’The finding that the regulated release of protons from non-neuronal cells controls rhythmic contractions of C. elegans muscle should stimulate many people to look for similar mechanisms for controlling other rhythmic behaviours in a wide variety of organisms and tissues.’