Putting the cement industry in the calcium loop

Capturing carbon from power station emissions could usefully be tied in with cement manufacture, researchers show

Scientists in the UK have shown that two major industrial processes that generate large amounts of carbon dioxide could usefully be linked together to deliver significant savings in energy and CO2 emissions.

For several years researchers have investigated ways of capturing and concentrating CO2 from fossil fuel power stations so that it can be trapped, possibly in underground rock formations. One promising method involves reacting the flue gases with calcium oxide. The CO2 in the exhaust gas combines with CaO to form calcium carbonate, CaCO3. This can then be heated to drive off the CO2 at a much higher concentration. The process regenerates CaO, which can be used for further cycles. Typically flue gases contain around 15 per cent CO2, which can be concentrated to around 95 per cent through this ’calcium looping’ process.

After repeated cycles the CaO undergoes morphological changes which reduce its efficiency for producing CaCO3. It has been suggested that this spent CaO could be used as a feedstock for the production of cement. The cement industry requires a large amount of CaO, which is produced by heating calcium carbonate in the form of limestone, which in turn produces significant CO2  emissions. 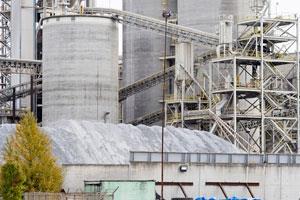 However, it has not been clear if the CaO derived from the calcium looping cycle would be suitable for cement manufacture. Now, Charles Dean, Denis Dugwell and Paul Fennell, from Imperial College London (with funding from Cemex and the EPSRC), have carried out laboratory scale tests that suggest that spent CaO sorbent from CO2 capture retains the appropriate chemistry for its inclusion in cement, with no detrimental properties to the final product.

’If you take off a purge stream of calcium oxide from the calcium looping cycle, it should be possible to feed this directly into the cement works,’ says Fennell. ’This would save about 50 per cent of the CO2 produced in production.’ The requirement for less energy to generate the CaO from limestone would also create significant cost savings. ’We have shown for the first time that cement can be successfully produced from CaO previously used in the calcium looping cycle, thereby confirming a positive synergy between the two processes,’ says Fennell.

Hannah Chalmers of the University of Edinburgh in the UK is a member of the Scottish Carbon Capture and Storage research group. She says successful application of CO2 capture to cement manufacture could be an important part of global efforts to reduce greenhouse gas emissions.  ’This work includes important information for developing an understanding of the economic and environmental performance of CO2 capture from cement manufacture, which could be vital for successful development and deployment of this technology.’