On the afternoon of 11 March 2011, Jun Okuda was riding the subway deep below the Tokyo skyscrapers when the train stopped dead. The conductor announced that a powerful earthquake had just hit the northeastern coast of Japan and shock waves were headed for Tokyo. Okuda, the director of the institute of organometallic chemistry at Germany’s RWTH Aachen University, said that, within minutes, the carriages started shaking.

’The duration was unusually long but everybody remained calm,’ says Okuda, who was in Japan visiting his parents. A short time later the train resumed its trip to the next station, where all passengers were asked to exit the train. ’When I reached the surface, I was struck how relatively normal life was,’ he says. ’In Tokyo the damage was minimal. The traffic was busy as usual, but many people were trying to catch a cab to reach their destination or, like me, just started walking.’ But as the afternoon wore on towards evening ’everybody started to sense a catastrophe somewhere else’.

Sendai city, the home of Tohoku University, was one of the areas worst hit by the disaster

The world would soon learn that Japan had been struck by a horrific, almost unimaginable, disaster, which caused widespread death and destruction. A number of universities were badly damaged, university classes were suspended in several regions, hundreds of foreign students and scientists fled the country and international science conferences were cancelled.

The magnitude 9 earthquake was the most powerful ever recorded in Japan and triggered a massive tsunami with waves reaching heights of 40m in some areas. Nearly 16,000 people were eventually confirmed dead and more than 3000 people are still missing. More than 125,000 buildings were damaged or destroyed as were countless roads and rail lines. Some damage estimates go as high as $300 billion (?190 billion) and rebuilding is expected to take several years.

Among the universities damaged by the earthquake, by far the hardest hit was Tohoku University, one of the world’s top engineering schools with more than 18,000 students spread over five campuses in the coastal city of Sendai. While the tsunami destroyed parts of the city a few kilometres from the coast, the waves did not reach the campuses. Off campus, three Tohoku students were killed and 14 injured, and the homes of 526 students were damaged or destroyed. 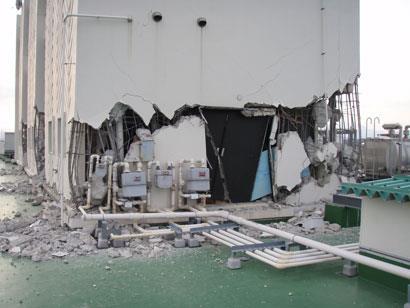 The earthquake left 28 Tohoku University buildings ’unsafe’, 5% of the total, and restricted the use of an additional 48 buildings, 8% of the institute’s buildings. After temporary reinforcement work was carried out on many buildings, inspections followed. The survey concluded that three quake-stricken buildings - civil engineering and architecture; electrical engineering and applied physics; and materials science and engineering - on the Aobayama campus would have to be knocked down and rebuilt. The Aobayama campus, home to science and engineering departments, suffered the most damage.

Official estimates of the cost of the damage are difficult to obtain. But Masahiro Yamashita, professor of chemistry at Tohoku, says that the damage was estimated at $1 billion (?640 million) and that further money is being made available for rebuilding. ’A new chemistry building will be finished next year,’ he says.

The chemistry building, which was severely damaged by a fire that swept through it fuelled by lab chemicals, was finally reopened last month. But many researchers are still afraid to work in the refurbished upper floors of the lab, remembering the devastation all too well. As a result, money from the restoration budget has been set aside to build a new low-rise lab for organic chemistry. Researchers on the lower floors of the chemistry building will continue to work in the old building. 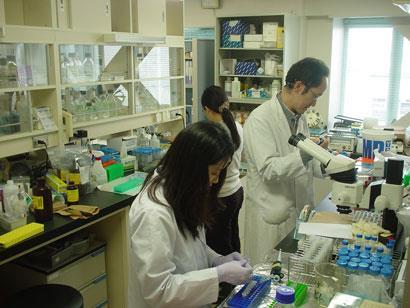 The labs at Tohoku University have been repaired and refurbished

’The dangerous collapse of pillars and walls was fixed early, so that the campus appeared to be restored as before at a glance,’ says Tadahiro Komeda, a nanotechnology professor at Tohoku University. ’Even if the exterior appearance has been returned to normal, the internal repair process is still ongoing. Some rooms are not cleared up at all. Damage is still visible in front of our eyes even one year after the disaster.’

’Activity at Tohoku University was almost completely stopped,’ says Masato Kubo, a molecular pathology professor in the research institute for biological science at Tokyo University of Science, who has friends at Tohoku University. ’The effect on research there is still devastating. Some people lost everything in their labs and most of them have to start from zero.’

At the time of the earthquake, the Aobayama campus area was being renovated, with a new underground station being built. Tohoku University has turned these renovation plans into renewal ones that will see the campus earthquake-proofed. Plans to protect the Aobayama campus from future earthquakes have also been extended to the Katahira campus, where damage was relatively light. Tohoku now plans to build an intelligent, earthquake-proof building - drawing on research carried out at the university - that will house some of the science faculty. Yoshihito Watanabe, vice president at Nagoya University and a professor of bioinorganic chemistry, said that other universities damaged by the disaster include Fukushima University and Tsukuba University. Thus far, Watanabe says, the Japanese Ministry of Education has spent $1.6 billion (?1 billion) on universities, including rebuilding damaged structures, renovating research facilities and providing scholarships for students. An additional $1.2 billion has been allocated for the next fiscal year beginning in April.Watanabe says it is impossible to quantify the effect of the disaster on Japanese research, but says: ’I suppose the total effect of the damages on the research output may be within just a few per cent of normal activities.’ Watanabe and others interviewed by Chemistry World  wanted to express their thanks for the outpouring of international support following the disaster. ’We have received much support, including donations of money, from many countries,’ Watanabe says.

A major impact of the disaster was the flight of foreign students and staff and not just in the disaster hit regions. Many who left Japan did so because of radiation fears from damaged nuclear power plants. ’There was a true exodus of foreign scientists and students who left Japan in a panic, causing considerable irritation among Japanese colleagues,’ says Germany-based Okuda. ’Many Japanese universities, particularly those remote from the disaster area, did not understand why foreigners left.’

Okuda says the German media coverage of the damaged nuclear power plants, especially the worst hit Fukushima Daiichi nuclear power plant, verged on hysterical. Of the foreign students and staff who fled Japan, he says the ’Germans were the first to leave and the last to return’. He still has memories of returning to Germany just after the earthquake and, along with other passengers, being checked with a Geiger counter as he got off the plane.

Watanabe notes that half of the short-term international exchange students planning to spend one or two semesters at Nagoya University last year cancelled. ’But most of the [long-term] degree-seeking international students came back to Japanese universities, including to Tohoku University,’ he says.

Radiation concerns in the months following the disaster, as well as infrastructure damage, led to the cancellation of most scheduled international scientific conferences in Japan. Moriya Tsuji, an associate professor and staff investigator at Rockefeller University-affiliated Aaron Diamond AIDS Research Center in New York, US, says a lecture he had planned to give to a gathering of pharmaceutical companies in Japan in April 2011 was cancelled. But Tsuji says that the Japanese scientists he communicates with who were not directly touched by the disaster appear to have recovered fairly quickly. ’I met with several Japanese immunologists at a meeting in Chicago last September and they were all just fine by then.’

At the first anniversary of the earthquake and tsunami, Japan is still struggling to rebuild. But researchers are optimistic. Even at Tohoku University ’the mood of most staff and students is good,’ says Yamashita. Kubo sums up the general feeling in the research community saying: ’The general mood [after the earthquake] was down. Now people are starting to think: "We have to move on."’

How are the science institutions of Japan faring four months after the earthquake and tsunami?