A basic quantum computer has successfully tackled one of the most challenging tasks facing chemists today - calculating molecular energy from basic scientific principles.

Although knowing a molecule’s energy can help predict reaction rates, the computer power needed and complexity of working it out from first principles forces chemists to use approximations, which may be inaccurate. Andrew White of the University of Queensland, Australia, explains that a 2005 study1 calculated full models for hydrogen and helium, but couldn’t go any further. ’They said that for the foreseeable future lithium looks impossible,’ he said. ’If you took a molecule with 100 electrons, you couldn’t even solve that using every computer in the world at once.’

Now, White and his colleagues have created a computer exploiting the exotic behaviour of quantum mechanical systems to solve problems like these2. In such systems, computational power increases exponentially with every extra quantum bit, or qubit, paralleling the demands of calculating molecular energies. White stresses how exciting this approach to chemistry is: ’Somewhere in the next 20 years we will certainly have systems with tens to hundreds of qubits, where you "break the bank", exceeding the combined computational power of the world,’ he predicts. 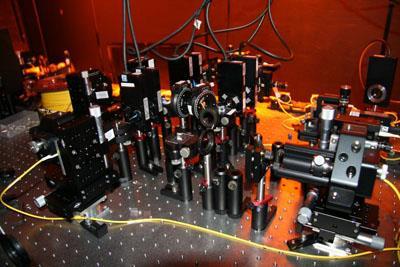 White’s team’s system featured just two qubits, in the form of photons created simultaneously by shining a laser into a crystal. They processed these through a quantum logic gate also developed in Queensland, using quantum computing algorithms developed by collaborators at the University of Harvard in the US to calculate hydrogen’s molecular energy. The computer returned a -535.58?0.03kJmol-1 ground-state energy at an equilibrium bond length of 73.48pm, agreeing exactly with the result obtained on a conventional computer.

The scientists had to rely on ordinary computers to perform some parts of the algorithm, a fact that currently limits this approach to the smallest molecules. They estimate that to reproduce the hydrogen simulation in a way that could be scaled up would need four qubits and 522 perfect gates. While four qubit computers are currently possible, White concedes that a system with 522 gates isn’t.

Paul Sherwood, leader of the UK’s Science and Technology Facilities Council computational chemistry group called this ’a significant step forward’. ’While many technological challenges remain, this groundbreaking work offers the exciting prospect that future generations of chemists will have access to highly accurate quantum chemical simulations, free of the many of the complex approximations that are necessary today,’ he said.