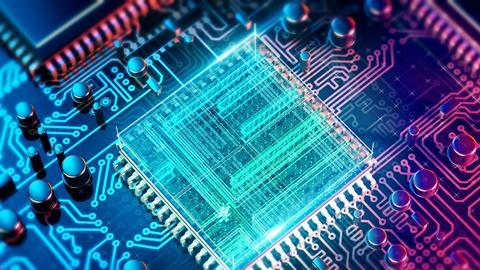 Quantum information processing uses quantum phenomena, like quantum superposition and entanglement, to encode information. Quantum bits, or qubits, are the building blocks of quantum information processing, much as classical ‘bits’ are for current computers. Like bits, qubits carry information, but, unlike bits, qubits can exist simultaneously in multiple states – known as superposition. This allows for faster and more complicated information processing. The problem is that maintaining this state is hard. Noise from the outside environment, or even from lattice vibrations within the molecule itself, can cause decoherence, and the irreversible destruction of the information that the qubit carries. The time a qubit can maintain this quantum superposition – its coherence – depends on the material or molecule used and its environment. Lower temperatures decrease noise, so current quantum computers run at temperatures close to absolute zero. 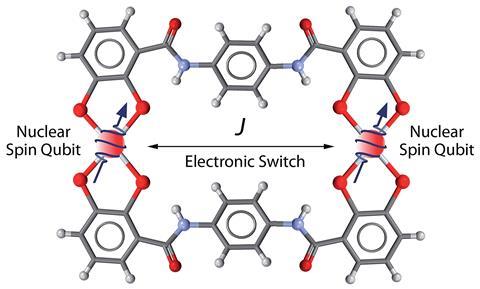 Another barrier to practical quantum computing is building ‘gates’ out of multiple qubits. This is where entanglement comes into play. When qubits interact, they become entangled, meaning that their states must be described relative to each other. Experimenters exploit this to complete quantum logic operations. Unfortunately, once a qubit becomes entangled with another it is often difficult or impossible to reverse this coupling.

Molecular spin qubits are a particular type of qubit, where a molecule’s spin properties carry information. This is either the electronic or nuclear spin. Previous studies have focused on using electron spin, however this results in permanent qubit–qubit interactions and requires complicated error corrections. Nuclear spins are more isolated from their environment and so have longer coherence times. However, they can result in weak and permanent interactions, making the gates slow.

A team of experimental chemists and theoretical physicists around Roberta Sessoli and Matteo Atzori, from the University of Florence, and Stefano Carretta, from the University of Parma, wanted to demonstrate that, with careful design, relatively simple magnetic molecules are useful as platforms for quantum simulations. ‘Nowadays there are many studies on coherence times in systems proposed as molecular qubits, with impressive results,’ they explain. ‘However, the big challenge is to link them together in a well-defined multi-qubit architecture, such that they can be coherently manipulated.’ Stephen Barnett, a theoretical physicist with expertise in quantum information from the University of Glasgow, UK, agrees: ‘The ability to control the coherent interaction between quantum spins, or qubits, is the key technical requirement to unleash the potential of quantum information processing.’

Building on their previous work describing vanadium-based qubits with long relaxation times,2 the group wanted to construct a molecular system of two weakly-interacting d­-metal ions that could be easily manipulated using electromagnetic pulses. To do this, they used ditopic-catecholate ligands to link the two qubits. These ligands allow fine-tuning of the qubit–qubit distance and therefore the magnetic interactions. This architecture aims to simultaneously exploit the ‘long coherence times of nuclear spins and the fast controllable dynamics of electron spins’. The group were surprised to see that the molecule exhibited a coherence time of 1µs, which was almost unchanged at temperatures as high as 100K (-173.15°C). The team says this result demonstrates that ‘the molecular design of the qubits and the linking unit has been key in preserving the long spin coherence observed.’

The team went on to test their architecture in both single and two-qubit gates. Using their electronic ‘switch’ they encoded each qubit separately in a single-qubit gate, but also induced reversible entanglement using a controlled phase-shift two-qubit gate. Using uniform electron paramagnetic resonance pulses, they are able to turn the interaction between qubits “on” and “off”, unlike the permanent interactions of typical NMR schemes.

They applied the system in a proof-of-principle experiment using the quantum simulation of the time evolution of a spin S=1 experiencing quantum tunnelling. To implement this, they split the time evolution into small time steps and calculated each one with a sequence of gates.

Barnett describes the idea of coupling qubits within a single molecule as ‘interesting and most welcome’ and says that the challenge will be to see if this new idea can be scaled up to a much larger number of qubits.