US researchers have developed a rapid testing kit for HIV, which uses nothing more sophisticated than quicklime to power it. The device, which relies on heat generated from the hydration of calcium oxide, should be useful in situations where there is no electricity, such as in rural areas in developing countries. 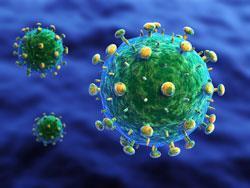 To contain the spread of HIV and to treat carriers of the virus effectively, it is important to diagnose the condition at the ’point of care’ - rather than in a remote laboratory. HIV antibody tests have been developed that allow this, but they lack the ability to detect recent infection because of the lag between transmission of the virus and the appearance of the antibody - a period when transmission rates can be especially high.

Tests that detect nucleic acids from HIV can, however, confirm the presence of the virus much sooner after infection. However, until now these tests have required costly equipment and need to be carried out in a laboratory.

Now, a team led by Kelly Curtis at the Center for Disease Control and Prevention in Atlanta, has shown that a simple device that is heated by the exothermic reaction between CaO and water can successfully and consistently amplify HIV nucleic acids to detectable levels.

CaO and water are mixed in an insulated canister whose lid is embedded with a proprietary ’phase change material’. The heat from the exothermic reaction is buffered by the material in the lid, and maintained at the required constant level of between 60 and 65?C. The lid contains reaction wells where the patient’s blood sample is incubated with the relevant nucleic acid primers and enzymes to provide the ’isothermic’ amplification. ’This phase change material ensures that that temperature of the amplification reaction remains relatively constant throughout the 60 minute incubation,’ says Curtis. The primers that are used to ’seed’ the reaction contain a fluorescent label. This label allows for visual detection of the amplified products, once the amplification cycle is complete.

’The heating device has been described previously, but has not been evaluated as a tool for HIV detection,’ says Curtis. ’This low cost, simplified approach has the potential to fill a large unmet need in the field of HIV diagnostics, especially in resource-limited settings.’

Commenting on the study, Claire Thorne, who researches child health, with a particular emphasis on HIV transmission, at University College London, UK, says: ’The fact that these point of care tests can be used in settings where there are no or very limited laboratory facilities is a huge advantage, as most people with HIV live in sub-Saharan Africa or other resource-poor settings where laboratory capacity is limited.’