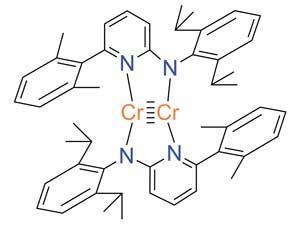 The activation of carbon dioxide, sulfur dioxide and nitrous oxide by a quintuply bonded dichromium complex has been reported by a team of researchers from Germany.

Far from being just an academic curiosity, metal–metal multiple bonds are known for being highly reactive towards small, thermodynamically stable inorganic and unsaturated organic molecules. The controlled activation of small molecules is important not only to reduce atmospheric emissions but also as a potential source of useful synthetic feedstock.

Inspired by previous interest in carbon dioxide activation and quintuple bond reactivity, Rhett Kempe and colleagues at the University of Beyreuth in Germany have now reported the formation of structurally unique products when carbon dioxide, sulfur dioxide and nitrous oxide react with a Cr–Cr quintuply bonded complex.

Carbon dioxide was reduced by the low oxidation state Cr–Cr quintuple bond to produce oxygen gas and two bridging carbonyls across an oxidised Cr–Cr bond. Exposure of nitrous oxide to the quintuple bond resulted in a chair-like cluster containing a central [CrO]4 fragment and stoichiometric loss of nitrogen gas. Whilst reactions between metal–metal multiple bonds and these small molecules have precedence in literature, the reductive coupling of sulfur dioxide by this powerfully reducing quintuple bond to form a bridging dithionite ([S2O4]2-) ligand has until now not been reported.

John Berry, an inorganic chemist at the University of Wisconsin, points out that ‘while an analogous reaction to split carbon dioxide into carbon monoxide and oxo complexes has been reported before for metal–metal multiply bonded compounds,’ the ability of Kempe’s complex to sever the C–O bond in CO2 but not the weaker S–O bond in SO2 points to ‘some very intriguing mechanistic possibilities for how these reactions take place.’

The application of this stoichiometric reaction towards addressing the problem of gaseous pollutants is questioned by Klaus Theopold from the Center for Catalytic Science and Technology at the University of Delaware. However, he continues, ‘this work nicely enhances an emerging picture, which is dominated by strong binding of p-acids and a tendency towards reductive coupling reactions. One of the interesting questions for the future is whether this new inorganic bonding motif will show any utility in catalysis.’