Tetrathiafulvalene radicals, which would normally repel each other, have been studied while in close proximity thanks to a supporting structure

Researchers in the US have succeeded in trapping pairs of unstable radicals of tetrathiafulvalene (TTF), a compound with potentially useful semiconducting properties. They used a catenane ’molecular flask’, incorporating interlocking ring components, to restrain two TTF radicals in close proximity. This system opens a new way to investigate interactions between radicals, something that has so far proved difficult.

TTF is a synthetically versatile molecule that in salt forms behaves as a semiconductor. However, elucidating the interactions between the different redox states of TTF - the conducting and insulating forms of the TTF units - is difficult because of their inherent instability in solution.

In their neutral state, two TTF molecules will sit happily in a large tetracationic molecular square, cyclobis(paraquat-4,4’-biphenylene). However, as soon as an electron is withdrawn from one of the TTF units, repulsive forces cause them to fly apart and vacate the square. To trap the TTF units, the team led by Fraser Stoddart at Northwestern University in Illinois incorporated two TTF units into rings. These rings were then looped around the molecular square, forming a three-component catenane, shackling the TTF units in position. 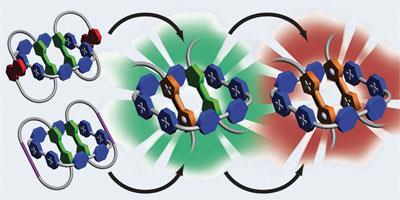 ’We can then use chemical or electrochemical methods to withdraw electrons sequentially from the TTF units,’ says team member Albert Fahrenbach. This oxidation creates radical cation forms of TTF, which ordinarily would dissociate, but are here mechanically locked in place.

’By withdrawing one electron we have one radical cation and one neutral unit,’ says another member of the group, Ali Coskun. ’If you then take out a second electron, you have two radical cations.’

A third group member, Ross Forgan, adds: ’It is very difficult to get two TTF units together to then access and study their radically-paired states. This is a proof-of-principle study that will help us to understand the nature of interactions between important radical species.’

AP de Silva, an expert on supramolecular chemistry at Queen’s University Belfast, UK, says that the ability to study mechanically constrained TTF dimers switching between various redox states is ’a useful way of shedding light on hole-transport in TTF stacks.’