Radical reactions are challenging to measure at cold temperatures, but an international team of researchers have recently clocked the rate for atomic nitrogen and hydroxyl radicals at 56K. The results correct the model for molecular nitrogen formation in space and the team says the method should work for other radical species, paving the way for future cold reaction studies with astrochemical implications.

Creating unstable atoms and molecules in large quantities - and then measuring their concentrations - are the dual difficulties in gauging the reaction rates of radical atoms and molecules. Kevin Hickson of the University of Bordeaux, France, and colleagues overcame these problems by miniaturising their cooling apparatus and deducing their target reaction rate with the help of a known reference reaction. 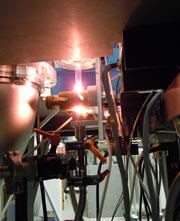 The team cooled atomic nitrogen, H2O2 and a buffer gas  by passing them through small Laval nozzles, similar to those used on space shuttle booster rockets. The nozzles converted the thermal energy of the gas into kinetic energy, effectively cooling it. Because the diminutive nozzles work with smaller flow rates, the team produced enough atomic nitrogen by microwave heating of molecular nitrogen. In the reactor, a UV laser split the H2O2 into OH, and the OH reacted with the plentiful N to form NO and H. The NO then reacted with N to form N2 and O. This pair of reactions is thought to generate the bulk of the molecular nitrogen in dark, dense interstellar clouds.

Two more lasers provoked fluorescence from the OH and NO molecules, tracking their abundance. The disappearance of OH gave a rough measure of the rate constant for the first reaction, while the production and then consumption of NO gave the difference in the two reaction rates. Because the team already knew the rate of the second reaction, they could calculate the rate of the first - and their rate constants were lower than previous measurements.

’It’s a clever piece of work,’ says Ian Smith of the University of Cambridge, UK. ’It should be applicable relatively generally.’ However, he notes that the reaction temperature will have to be 10K to truly mimic dense interstellar clouds.

Observations show that molecular nitrogen is less abundant than predicted in these clouds, supporting a lower reaction rate, but the team also undertook quantum rate calculations. These verified their findings and confirmed  that the method can be used to measure other neutral radical reaction rates. ’In the future, we’re planning to study many more of these systems that play important roles in planetary atmospheres, the interstellar medium and even in the Earth’s atmosphere,’ says Hickson.