Scientists in China have used a laser to carve out a pattern of ridges and valleys on layered graphene oxide to mimic two of nature’s tricks in one go - iridescence and superhydrophobicity. The resulting surface has a magnificent shimmering sheen like the wing of a butterfly or the shell of a beetle, while at the same time collecting water into almost spherical droplets, as a rose petal does. 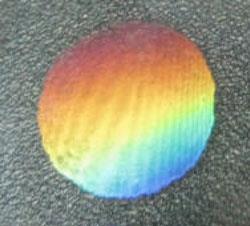 The researchers, at Jilin University in Changchun, say that the biomimetic surface could be useful in combination with graphene’s other remarkable chemical, physical and electronic properties. For example, superhydrophobic surfaces could be important for microfluidic devices, where small volumes of liquid need to be transported in a controlled way. Graphene has been touted as a biocompatible surface for growing cells - where controlled wetting could be important. Iridescence could a way of decorating a surface for aesthetic purposes, or could make a graphene surface conspicuous. ’Iridescent graphene might change the optical properties of graphene-based microdevices,’ says team member Yong-Lai Zhang.

In nature many surfaces show superhydrophobicity - where water does not spread but gathers into almost spherical droplets. This arises because of microscopic ridges and indentations on the surface that traps air and prevents droplets from spreading - as seen in many plant leaves and flower petals. Similarly, iridescence arises from periodic structures which have order at both the micro- and nanoscale. These act as diffraction gratings that split white light into its constituent wavelengths. In this way a butterfly’s wing can shimmer with different colours while having no inherent pigmentation.

The Jilin team created iridescent graphene by merging two laser beams to create an interference pattern on the surface of layered graphene oxide. This burned out a series of parallel grooves on the surface, around 2um apart. 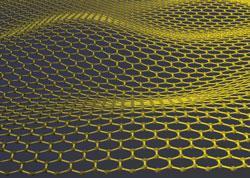 Graphene is prized for its electronic properties

The surface immediately took on ’a wonderful iridescent appearance,’ says Zhang. Close inspection of the grooves showed that there were dense nanofolds and convolutions at the edges of the grating - which probably arise from the graphene’s layered structure and this contributes to the light-splitting effects.

When the researchers exposed the patterned surface to water, they observed superhydrophobicity. This, says Zhang, is due to two surface effects. ’On the one hand, the obtained multilevel structure gives rise to a microscopic unevenness,’ he explains. ’On the other hand, the sharp decrease of hydrophilic oxide-based functional groups of the graphene oxide during laser irradiation lowers the surface energy. Both of the two facets contribute to the superhydrophobicity.’ The particular pattern produces highly adhesive superhydrophobicity - the droplets will not roll away or detach, even when the surface is held upside down. The same phenomenon is observed with rose petals.

Torben Lenau is an expert on biomimetic surfaces at the Technical University of Denmark. ’If both hydrophobicity and iridescence are needed it is very interesting that they can be achieved in a single operation,’ he says. ’They talk about liquid transportation in microfluidic systems and biomedical surfaces that stem cells can adhere to. Both obvious needs - and nice to be able to control the degree of hydrophobicity. Concerning the iridescence, I can imagine that it could be an advantage for colour coding. The user will easily know - just by looking at it - if the surfaces are in the right state for flow or cell growth.’