Surface enhanced Raman scattering (SERS) works by detecting spectroscopic signals of molecules such as cancer antibodies that are in close proximity to metals injected into tissue such as gold or silver nanoparticles.

Nicholas Stone from Gloucester Royal Hospital and colleagues have combined SERS with deep Raman spectroscopy to enable non-invasive analysis of multiple antibodies for different diseases tagged to nanoparticles. The combination allows for the first time antibody detection to a depth of 50mm in tissue samples.

Current methods using SERS and Raman spectroscopy are only able to detect nanoparticles at a maximum depth of 5mm. ’Light doesn’t travel too deeply into tissues so it’s hard to measure signals from deeper within the body,’ explains Sanjiv Sam Gambhir, director of the Molecular Imaging Program at Stanford University, US.

This limits the use of SERS in measuring breast tissue, for example, as mammography screening protocols generally measure signals through a tissue depth of 20 to 50mm. ’[Stone’s] work solves a limitation of Raman imaging by developing strategies to go from about 5 to 50mm depth penetration,’ adds Gambhir. 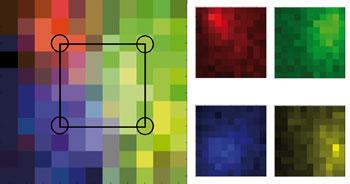 To demonstrate their method, Stone’s team coated gold nanoparticles with four different Raman reporter molecules - molecules that give signals at specific wavelengths - and encapsulated them in a silica shell. They suspended them in water and injected them into a porcine tissue block measuring 20x50x50mm. The signals from each different nanoparticle were then used to produce a false colour image of their locations in the tissue.

Being able to distinguish between different molecules like this means that the technique could be used to detect cancer, monitor treatment and chemosensitivity, provided that the target molecule is known. ’Cancer and other diseases of interest are complex and there is not a single marker which can be used to identify cancer or its susceptibility to treatment,’ explains Stone.

Stone now hopes to label the nanoparticles with a wider range of antibodies for use in practical applications. Provided that the nanoparticles’ excretion mechanism is found to be safe when injected, Stone thinks that his approach could open up a window to more of the human body.