Rapid route to huperzine A

Chemists have devised a synthesis of a scarce, but valuable, natural product

US chemists have devised an efficient synthesis of a natural product with great potential as a protectant against chemical warfare agents and in the treatment of Alzheimer’s disease.

Huperzia serrata, one of an ancient lineage of plants known as the firmosses, has been much in demand lately because it contains a chemical known as (-)-huperzine A. This alkaloid is a potent and selective inhibitor of acetylcholine esterase, and as a result is able to counteract the action of certain chemical warfare agents, such as sarin and VX. There are also strong suggestions that it may slow the progression of neurological diseases such as Alzheimer’s disease. A team of organic chemists led by Seth Herzon at Yale University, New Haven, has now developed a high-yielding route to this elusive natural product, opening up opportunities for its wider clinical evaluation.

’The primary obstacle to the clinical development of (-)-huperzine A has been one of supply,’ says Herzon. He points out that the average yield from the dried herb is just 0.011 per cent, a problem compounded by the nearly 20 years it takes to reach maturity, coupled with its increasing scarcity due to overharvesting in its native China. 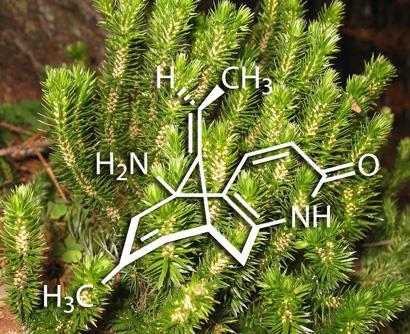 (-)-Huperzine A, a natural product that could be used to treat Alzheimer’s disease, has been synthesised in eight steps

To address these problems, several groups have in the past devised syntheses of (-)-huperzine A, with the best to date employing 16 steps and giving an overall yield of about 2.8 per cent. Herzon and his team have now beaten this by a factor of 16, with an eight-step synthesis that gives 25-45 per cent overall yield.

Their route takes a different approach to most previous designs, by taking two readily available molecules - a chiral enone and a pyridine derivative - and joining them together at an early stage using silylcuprate chemistry. A subsequent enolate heteroarylation then clips the two ends together, providing the bicyclic ring of the target molecule.

Herzon says that one of the key benefits of the method is that ’it requires only three chromatographic purifications’. He concludes that their chemistry will provide a ’reliable supply’ of the chemical, and ’will greatly facilitate its clinical development for neuroprotective and anti-neurodegenerative applications’.

’This is a nice scalable total synthesis,’ says Steven Weinreb, professor of chemistry at Penn State University, US. The key feature, he says, is ’the development of a simple strategy that potentially allows access to large quantities of this scarce natural product from readily available materials’.