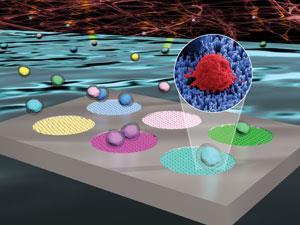 Each region on the nanowire chip captures cells expressing the corresponding surface markers against the attached antibodies.

A technique for spotting the small numbers of immune cells that cross the blood–brain barrier into the cerebral spinal fluid (CSF) may offer early clues on neurodegenerative disease progression.

As life expectancy rises across the world, the number of elderly people at risk of developing neurodegenerative disorders such as Alzheimer’s disease (AD) is growing. Current models of AD presume that neurodegenerative changes in the brain start well before the clinical symptoms become apparent. Accordingly it is essential to develop early detection methods to improve patient care and aid in the selection of the best treatment.

Recent research has highlighted the role of leukocyte (white blood cell) transport in the development of neurodegenerative disorders. ‘These diseases involve persistent inflammatory conditions in which leukocytes move into and out of the disease lesion and participate in disease development,’ says lead researcher Rong Fan at Yale University in the US. ‘It turns out these cells migrate into the CSF, which is like the blood of our central nervous system. Therefore, we hope to characterise these leukocytes to detect pathophysiological changes in the brain.’

However, the abundance of trafficking leukocytes in CSF is very low, meaning that large quantities of CSF are required for analysis by conventional techniques such as flow cytometry. This is both impractical in a clinical setting and very invasive for a patient. Now, Fan and co-workers have created a silicon nanowire chip coated with different leukocyte-specific antibodies to capture and separate a range of immune cell types before they are counted using laser scanning cytometry.

Only 50µL of CSF is required per assay because the nanowire platform captures cells with very high efficiency. ‘This is particularly important as CSF is collected in small volumes and is usually intended for multiple clinical diagnoses,’ says Bianxiao Cui, a nanobiotechnology expert at Stanford University, US, who was not involved in the work.

In a preliminary investigation on a small number of AD patients the team found marked differences in the levels of certain leukocyte types compared to normal CSF samples. They are now looking to collaborate with neurologists and neuropathologists to carry out a large scale clinical study to validate their results.