The European Union is partnering with industry to try and prevent a large number of chemical companies missing an important deadline under the Registration, Evaluation, Authorisation and Restriction of Chemical Substances (Reach) regulations that could cause chemicals to be removed from the market.

The joint group is expected to put forward proposals in April to prevent chemical producers and importers missing a 30 November deadline for the registration of high volume and potentially toxic substances.

If the chemicals are not registered with the required safety information in time they will be withdrawn from the market under the Reach rule of ’no data, no market’, potentially causing disarray in chemical supply chains.

The Directors’ Contact Group (DCG), which consists of representatives of the European Commission, European Chemicals Agency (ECHA), the European Chemical Industry Council (Cefic) and organisations representing distributors, small and medium sized enterprises (SMEs) and oil and metal producers, was set up earlier this year to tackle problems with the preparation of registration dossiers.

The November cut-off, the first of three Reach registration deadlines, covers dossiers for chemicals produced or imported in annual volumes of 1,000 tonnes or more. It also covers registration of substances which are carcinogenic, mutagenic or toxic to reproduction   and chemicals used in quantities above 100 tonnes per year that pose long term risks to aquatic organisms. 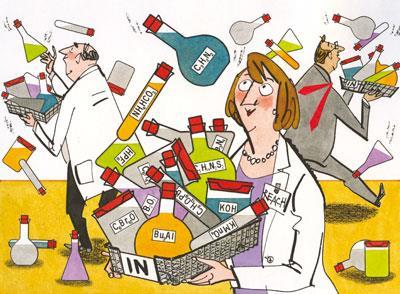 Gathering the necessary data by the November deadline could be tricky

The ECHA estimates that around 9,000 substances fall into these categories, so there should be a corresponding number of substance information exchange forums (Siefs) assembling dossiers.

So far, however, appraisals by regulatory agencies and trade associations indicate that only a minority of the estimated substances have active Siefs gathering the required data. Detailed surveys are being carried out by ECHA and national associations to try and ascertain the exact number of active Siefs and companies planning to make registrations by November.

’At the moment it appears there are only about 3,000 active Siefs,’ says Erwin Annys, Cefic’s Reach policy director. ’The task of the Directors’ Contact Group will be to find out what the problems are and what can be done to resolve them. It seems that drawing up registration dossiers can be an extremely difficult exercise for some small companies and for companies in Eastern Europe.’

SMEs in particular are hoping that the DCG will sort out some of their difficulties so that they can submit dossiers on time.

’We are expecting that at its next meeting in April the DCG will decide on some broad solutions to the problems SMEs are having,’ says Guido Lena, sustainable development director at UEAPME, the European association representing SMEs and a member of the DCG.

’We have been going through a phase of delicate negotiations,’ he continues. ’By getting together to try to find solutions we are hoping that steps will be taken to ensure that the registration process goes as smoothly as possible.’

The main problems for SMEs pinpointed by UEAPME relate to the running of Siefs -such as the prevalent use of English, lack of transparency, barriers to access to data and poor internal communications.

’The biggest difficulty is with the contracts on data and other issues which they are asked to sign by the people running the Siefs,’ says Lena. ’SMEs don’t know exactly what the contracts are, whether they are legal or not and whether they should sign them. They need guidance.’