Reactions in a crystal

Crystals that can alter their composition without changing the structure of their solid lattice have been developed by US researchers. The crystals are made from an iridium complex bonded to dinitrogen (N2), but other gases such as hydrogen (H2) or ammonia (NH3) can diffuse through the lattice and undergo reactions.

The crystals have great potential as novel reaction platforms, and can catalyse the hydrogenation of ethene gas (C2H4). Since larger molecules such as propene (C3H6) cannot enter the crystalline lattice, the process is highly selective. It is hoped that similar principles may be able to develop more size-selective crystals to perform industrially important reactions in the future.

’When we first synthesised the iridium-nitrogen crystals, they were light red,’ says Zheng Huang, who worked on the project at the Universityof North Carolina. ’After 12 hours in air they had turned dark-green, and analysis showed that oxygen had replaced the nitrogen.’

’We found that the crystals would react with hydrogen to form Ir-H2-H2 and with ethene to form Ir-C2H4. This means it can carry out catalytic hydrogenation to ethane (C2H6), marking the first time a hydrogenation reaction has been carried out inside a crystal,’ Huang adds.

The secret lies in the composition of the crystals: iridium ions surrounded by large pincer-like ligands. The complicated ligands give the iridium high reactivity (allowing it to complex with nitrogen gas) but also leave voids in the crystalline lattice. 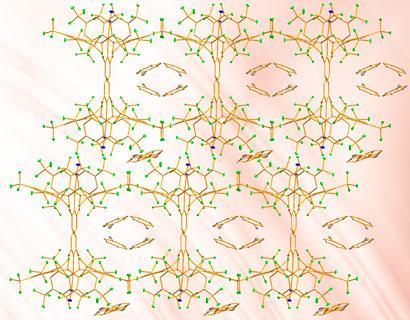 ’This system seamlessly combines the benefits of homogenous catalysis (well defined reactive sites) with heterogenous catalysis (ease of separation),’ says Timothy Warren at Georgetown University in Washington DC, US. ’By forcing substrates to migrate through the crystal lattice there is the potential for exquisite size and shape selectivity.’

’This work clearly demonstrates the potential of achieving high selectivity using carefully-chosen crystal lattices,’ says Malcolm Green of the University of Oxford, UK. However, he notes that designing customised crystals with useful applications in industry will still be challenging.

’A close modification of this system could have different selectivities, but it is always difficult to predict how molecules will pack,’ Green told Chemistry World. ’In addition, finding selectivity between industrially important compounds - such as pentene and hexene for example - will be more difficult due to their smaller relative difference in size.’