Hydrocarbons can made using hydrogen from water vapour and carbon from atmospheric CO2, in reactions powered by renewable electricity. Dubbed ‘e-fuels’, they may soon be commercially viable, given a helping hand from governments. 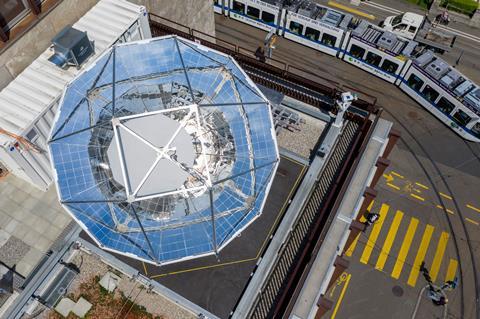 A raft of start-ups and research groups are racing to develop and scale up the technology. Nordic Blue Crude chief executive Gunnar Holen predicts his company will reach that goal towards the end of 2021. Engineering is underway for a €70 million (£60 million) plant to be sited at Porsgrunn, Norway. It will take carbon dioxide from the air and hydrogen from an adjacent ammonia plant and make hydrocarbons, powered by hydroelectricity. While the hydrogen will initially be fossil-sourced (from natural gas), Holen says it will eventually come from electrolysing water.

In Canada, Carbon Engineering (CE) is running a pilot plant 65km north of Vancouver, using a slightly different process. Meanwhile, Prometheus Fuels in Santa Cruz, US, has developed a system to make e-gasoline, and is now looking to venture capitalists for funding. SkyNRG, a Netherlands-based supplier of low-carbon kerosene (produced from biomass), is exploring the potential of e-jet fuel, while Swedish power giant Vattenfall plans to use North Sea wind power at Brünsbuttel in Germany to make around 15 kilotonnes per year of e-methane (although spokesman Lutz Wiese says the project timetable is yet to be finalised).

We already know there will be large demand for low-carbon jet fuel, but it’s too early to know which technologies will lead the supply. E-fuels are just one option

Behind them are about 7­–10 other players still in R&D. Swiss start-up Synhelion operates a pilot plant in central Zurich. On top of an otherwise-ordinary building, a mirrored, parabolic solar collector heats a catalyst-laced reactor. In go water and carbon dioxide from the atmosphere; out comes methanol – less than a litre a day.

These firms believe the time for e-fuels will come. Their best prospects are likely in aviation, which needs to decarbonise but electrification is challenging. Most agree broadly with a 2018 study, from campaigning group Transport & Environment, which estimates e-fuels might capture 1–2% of the European jet fuel market by 2025, 5% by 2030 and up to 100% by 2050.

Hand out for handouts

However, e-fuels’ penetration depends on government support. Nordic Blue, CE and Vattenfall are all counting on subsidies. Andrew Murphy of Transport & Environment suggests that success will also require governments to mandate uptake of e-fuel. Investment for commercialisation R&D, he adds, ‘will run more into the billions (of Euros) than the millions.’ Even so, his study figures that e-fuels at large scale will cost 3–6 times their fossil counterparts.

Aviation e-fuels will have to compete with jet fuel derived from ethanol. Low-carbon alcohol from cellulosic biomass is already commercial, and this can be dehydrated and oligomerised into synthetic kerosene. Commercial processes are in the works at three companies: US firms Gevo and Lanzatech, and Ekobenz in Poland. In its favour, alcohol-based jet has already been certified for use in airliners (while e-fuels have not), notes Oskar Meijerink SkyNRG’s future fuels leader. Working against it, he adds, is the fact that dehydration in ethanol-to-jet slashes yield, losing about a quarter of the product mass. ‘We already know there will be large demand for low-carbon jet fuel,’ Meijerink adds, ‘but it’s too early to know which technologies will lead the supply. E-fuels are just one option.’

The energetic challenge of making e-fuels economically means several technological options are being explored. For example, Nordic Blue will employ conventional carbon capture using an amine sorbent from Climeworks in Zurich. This will be combined with a ‘co-electrolysis’ process from Sunfire (based in Dresden, Germany) that simultaneously reduces CO2 to CO while converting water to hydrogen and oxygen. The resulting syngas (CO + H2) mix is then fed to a Fischer–Tropsch reactor that produces hydrocarbon waxes. At first, the waxes themselves will be the main product of the 8 ktonne/year plant, as ingredients for cosmetics and pharmaceuticals. As the plant expands to 80 ktonne by 2024, most of the output will be de-waxed into jet fuel, says Holen.

CE captures carbon in another way, washing it with potassium hydroxide into a solid salt. This can be stored, or further reacted into hydrocarbons. Why stored? Because CE’s initial business model is selling carbon credits for simple capture and storage. Its capacity for carbon capture far exceeds current demand for conversion to e-fuels. Details of its e-fuels process are under wraps: the company says only that CO2 and hydrogen ‘are converted thermo-catalytically to syngas, which is reacted to produce hydrocarbons.’

On 17 September – before construction has even started – CE said it will double the carbon capture capacity of its planned commercial factory to 1 million tonnes/year of CO2. Chief executive Steve Oldham said this expansion was in response to rising corporate demand for carbon credits gained by removing CO2 from air.

Prometheus is trialling yet another approach that it calls ‘reverse combustion’. Water and CO2 are catalytically reacted directly to ethanol, which is separated from the aqueous solution by a filter dotted with carbon nanotubes. The ethanol is then oligomerised to higher hydrocarbons. Company founder Rob McGinnis highlights that ‘the only inputs to make the fuel are CO2 and water (both from the air) and electricity, and the only outputs are fuel and oxygen.’ He concedes that theoretical efficiency is only 50–60% at maturity, but adds that this ‘doesn’t matter, as long as the electricity is zero carbon and low cost.’

The race to e-fuels is clearly on, but its path and final destination are still uncertain.