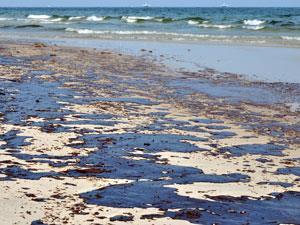 Scientists in Canada have shown they can recover oil from contaminated sand using surfactants whose emulsion stabilising ability is deactivated by carbon dioxide.

Land-based oil spills can be remedied by taking the sand (or soil away) for washing. The sand is heated and mixed with a surfactant solution, before the oil containing emulsion is removed to leave clean sand. However, the entire emulsion must be disposed of as hazardous waste.

The negative surface charges on sand particles mean that surfactants for cleaning oil contaminated sand need to be anionic. Cationic switchable surfactants were pioneered by Philip Jessop and his colleagues at Queens University, Kingston, Ontario, in 2006, and now the team have created an anionic version.

To release oil captured by Jessop’s carboxylate and phenolate anionic surfactants carbon dioxide is bubbled through the emulsion, acidifying the aqueous phase. This switches the surfactant structure from anionic to neutral, disrupting the emulsion by removing its ability to stabilise the oil/water interface. The oil separates and can be decanted for reuse and sale. Decarbonising the solution will switch the surfactants back on.

Jessop says that, although their results are preliminary, being able to recover the oil should make decontaminating oil spills cheaper and could ‘help companies be better citizens of the planet in terms of cleaning up’.

Yujun Feng, an expert in switchable surfactants from Sichuan University, China, is pleased to see these surfactants find such a useful application, however he notes that a challenge still lies in reducing the current processing temperature of 50 °C to make the system more viable.

Jessop’s team are planning to test their surfactants with a variety of sands, soils and common impurities to optimise them further.