Materials scientists at the University of Oxford, UK, are poised to join the Guinness World Records hall of fame with their latest breakthrough - the world's smallest test tube.

Materials scientists at the University of Oxford, UK, are poised to join the Guinness World Records hall of fame with their latest breakthrough - the world’s smallest test tube. 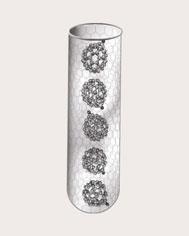 Approval by the Guinness editors rested on acceptance of the work by a peer-reviewed journal.

Now that the data have been accepted for publication by the RSC journal Chemical Communications, entry to the Guinness book of world records is assured, says first author David Britz of the University of Oxford’s department of materials.

’We have easily beaten the previous record holder’s volume by over an order of magnitude,’ triumphed Britz. In fact, he says, he wouldn’t be disappointed if his record was beaten, since his field is united in the quest for smaller and smaller structures.

The entry will go into the 2006 edition of the record book, so long as it isn’t beaten before April 2005, says science editor David Hawksett. ’It’s a great record and I’d be interested to see how long it stands for,’ Hawksett told Chemistry World. The book provides an ideal vehicle for telling children what scientists are up to, he adds. Hawksett is always on the lookout for new scientific records, especially prior to publication.

The Oxford team’s test tube - built from a single walled carbon nanotube - has a volume of less than 3.5 yoctolitres (10-24 litres). Besides being record-breakingly small, the tube offers a wealth of novel applications, opening up ’a new field in materials chemistry’, says Britz.

Reactions taking place in tubes of such dimensions do not follow the same course as reactions in larger volumes (see Chemistry World, August 2004). The one-dimensional cavity of the new tube provides a template for the production of unbranched polymer chains of C600 (fullerene oxide), a process that would normally require the use of catalysts, which are air- and water-sensitive and expensive. Without the catalysts or the confines of the novel tube, the polymer would be ’two dimensional and go in all directions’, said Britz.

Entry to the Guinness book of records was never the researchers’ overall aim, and finding themselves mentioned alongside the world’s fastest tomato ketchup drinker and the world’s largest collection of nail clippers is incidental. Nevertheless, the record is already bringing attention to the team’s work.

’I congratulate the researchers on their truly remarkable chemistry, and was delighted to publish their results in Chem. Comm. that resulted in their acceptance into the Guinness book of records,’ said Chem. Comm. managing editor, Sarah Thomas. The publication of record breaking research heralds another first for the journal, which will be making its debut as a weekly publication in the New Year.