Record-breaking hexagon made out of fused aromatic rings

Chemists have made the biggest network structure of its kind, a giant hexagon made out of 90 fused aromatic rings. This is almost double the size of the previous record holder, a 54-ring structure reported in 2018. 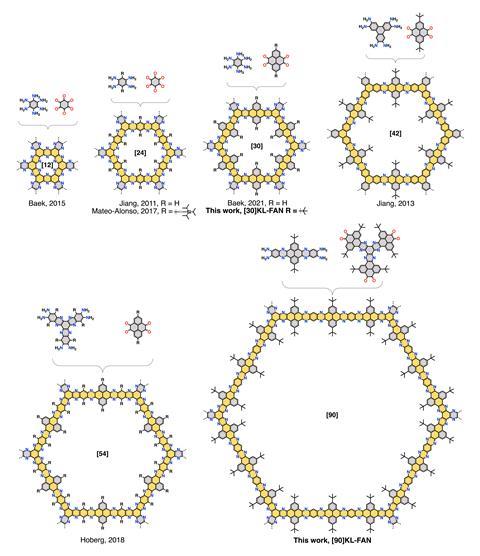 Fused aromatic networks (Fans) are a more chemically diverse alternative to perforated graphene. As the flat honeycomb structures are synthesised from node and linker monomers, chemists can fine-tune their properties – for example by using monomers containing heteroatoms.

But making ever larger Fans means using bulkier monomers, which become increasingly insoluble and hard to use in synthesis. And bringing these larger structures together requires harsh conditions, which aren’t always compatible with the monomers’ functional groups.

An international team has now made the biggest of them all: a Fan with each honeycomb hexagon consisting of 90 fused aromatic rings. The researchers designed the monomers – a tetraamine and a hexaone – to be just soluble enough to undergo a condensation at 170°C in a highly polar solvent. Comparison with a smaller, 30-ring structure revealed the 90-ring Fan to have a lower band gap and better nitrogen adsorption. 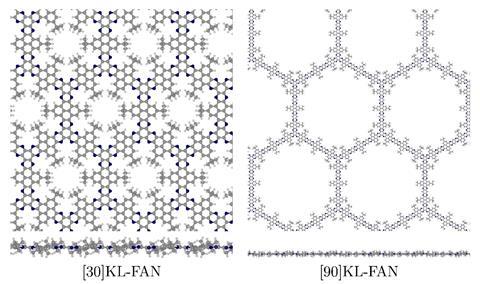 Monolayers of both investigated systems

Fans have properties – like band gap and charge carrier mobility – that make them promising for electronics and photovoltaics. Their nanometre-sized pores also interest scientists looking for membrane materials that can separate gases or purify water.