US chemists have withdrawn a claim that they created a crystalline nanowire that can conduct protons at world record speeds after other researchers, and subsequently they themselves, failed to reproduce the results. The finding was potentially significant because fast proton conductors are integral to the next generation of hydrogen fuel cells. 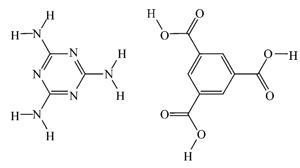 The saga, which has been played out in the pages of Angewandte Chemie, began in November 2011, after a team led by Hai-Feng Ji of Drexel University published a paper describing how the evaporation of water from solutions of trimesic acid (TMA) and melamine produced crystalline nanowires, or whiskers, which, when saturated with water, could conduct protons at a rate of 5.5S/cm.1 This conductivity is more than an order of magnitude higher than the industry standard material Nafion – used in fuel cells – and even higher than that of 1M HCl.

Analysis of the nanowires showed them to be up to 30µm long with a diameter of between 100–400nm. X-ray and electron diffraction data revealed highly ordered water channels inside the nanowires. ‘The high proton conductivity could be attributed to highly ordered helical water chains residing in the pores of the one-dimensional crystal structure, which can then efficiently transfer the numerous available protons of the acid–base complex along the axis of the nanowire,’ the researchers suggested.

However, at the Max Planck Institute for Solid State Research in Stuttgart, Germany, Klaus-Dieter Kreuer, an authority on proton conducting materials, felt that further investigation was needed. Given the extremely high conductivity rates he thought that the proposed mechanism did not fit comfortably with current ideas on how protons are rapidly shunted through a material, which requires a certain amount of disorder to allow protonic

charge to quickly diffuse along a pattern of hydrogen bonds. ‘The discussion of the conduction mechanism in the nanoassembly of trimesic acid and melamine by Ji and co-workers is by far not meeting today’s understanding of proton-conduction phenomena,’ said Kreuer and colleague Andreas Wohlfarth in a paper just published in Angewandte Chemie, challenging the original results.2

Kreuer and Wohlfarth used a different method to make nanowhiskers of TMA and melamine but ‘could not detect any significant conductivity’. The researchers add, ‘the very high conductivity reported by Ji and co-workers seems to be the consequence of the way the samples were prepared and the conductivity was measured’. Kreuer and Wohlfarth also carried out tests on samples provided by Ji, and again failed to measure any significant conductivity, suggesting that the conductivity that Ji and colleagues measured could have been down to ‘parasitic’ currents along the surface contaminated with precipitates from the solution. 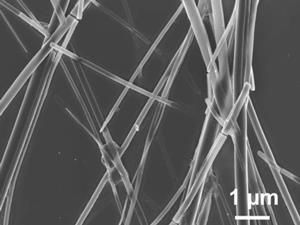 In a response to the Max Planck paper, Ji describes new experiments with the nanowires on different substrates, taking into account possible parasitic current effects.3 While some proton conductivity could be ascribed to some of the nanowire preparations, the results were, however, inconsistent.

Ji concludes his reply to Kreuer and Wohlfarth: ‘We would like to amend our statement that the trimesic acid/melamine nanowires have the highest proton conductivity to date, with a measured conductivity of 5.5S/cm. Based on all the experiments Kreuer and Wohlfarth, and our group have conducted, we conclude that the quality of the nanowire is crucial for its high proton conductivity. While the complexities of the measurement make exact determination difficult, the nanowires are capable of transporting protons. The nanowires seem to be prone to defects, with conductivities drastically changing depending on nanowire quality, sample preparation, and measurement conditions. Our future goal is to solve the problems related to the stability/fragility of the system in order to obtain a reproducible result for practical use of this new family of proton-conductive material.’

Other experts in proton conductive materials say that caution must be exercised when measuring currents in such small structures. ‘Measuring conductivity of very small structures is extremely difficult as any small errors due to parasitic losses or surface effects get strongly amplified when converting from resistance to conductivity,’ comments John Irvine of the University of St Andrews in the UK. ‘With proton conductivity in particular there are many competing conduction mechanisms and it is often difficult to unambiguously assign a conductivity to protons alone. There have been too many erroneous claims on conductivity of thin films and nanostructures and the utmost caution must be taken in reporting on such nanoscale materials.’

Hugo Schmidt, of Montana State University in the US, also notes that measuring protonic conductivity in materials whose properties depend strongly on humidity is ‘experimentally difficult’, as is the challenge of measuring conductivity in a single nanowire. Schmidt praises the scientists for their ‘fine example of cooperation after the Drexel result was challenged by the Max-Planck group’, and suggests that it remains worthwhile to continue to investigate the materials to improve their performance and reliability.