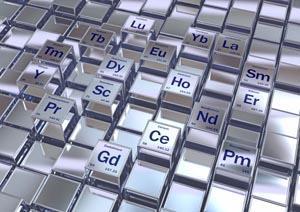 Recycling old magnets, so that rare-earth metals can be re-used, could help to solve an urgent raw material supply problem in the electronics industry. Researchers from the University of Leuven, Belgium, have used ionic liquids to separate neodymium and samarium from transition metals like iron, manganese and cobalt – all elements that are used in the construction of permanent rare-earth magnets, which are found in electronic devices ranging from hard drives to air conditioners and wind turbines.

‘The process involves the liquid-liquid extraction of rare-earth metals from the other elements present in neodymium-iron-boron and samarium-cobalt magnets,’ explains Koen Binnemans who leads the group developing the process. ‘These other elements – including iron, cobalt, manganese, copper and zinc – are extracted into the ionic-liquid phase, while the rare-earth metals are left behind in the aqueous phase,’ he says, adding that the ionic liquid itself – trihexyl(tetradecyl)phosphonium chloride – can also be re-used, after the transition metals have been stripped out.

In traditional liquid-liquid extractions of metal ions, an aqueous phase containing the metal salt is mixed with an organic phase containing an extraction agent. Simple though they are, these processes use organic phases comprising flammable and volatile solvents, like toluene, kerosene or diethyl ether. Ionic liquids are far more environmentally friendly, having very low vapour pressure and non-flammability.

The usefulness of neodymium and samarium in the microelectronics industry is outweighed only by their lack of availability. In a register put together by the US government these were the only two elements to feature in the highest supply risk category, and the European Commission has placed them on a list of critical raw materials. Currently, the vast majority of world’s rare-earth elements come from China, and this degree of dependence gives many foreign governments an uneasy feeling, especially when the materials are so crucial to high-tech defence projects.

‘Recycling is only a partial solution to the supply-risk problem; it cannot replace primary mining, though it can complement it,’ remarks Binnemans, adding that although less than 1% of rare-earth elements are recycled currently, 20% of global demand could be met in this way. ‘By combining mining and recycling the western world could become largely independent of China in the future,’ he says.

Binnemans’ next move is to extend his work on model systems towards real-world samples from end-of-life industrial magnetics. Andy Abbott of the University of Leicester is enthusiastic about the approach. ‘The topic of processing metals using ionic liquids is gathering speed,’ he says. ‘This work is particularly useful as it is amongst the first to look at the topical area of [recycling] rare-earth metals.’

Roberts adds, ‘The concept of using ionic liquids is similar to using an ion exchange resin. The advantage is that the capacity and specificity can be improved by using a liquid extraction phase.’