An international research team has devised a new method to accurately determine crystal structures and chemical properties using quantum mechanical calculations.1 NoSpherA2 (Non-spherical atoms in Olex2) can run on a desktop computer and obtains crystal structures in a matter of minutes. While some members of the same team previously showed how quantum mechanical calculations could determine the positions of hydrogen atoms back in 2016,2 NoSpherA2 is a more generally applicable method as it uses the free software Olex2, which is already widely-used by the crystallographic community. The researchers showcased their method by successfully refining three different compound classes that could not previously be refined using quantum mechanical calculations.

‘Refinement is the process of improving a trial model of a crystal structure to achieve optimal agreement with its experimental data,’ explains team member Horst Puschmann, from Durham University in the UK. ‘The experimental data is the diffraction pattern resulting from x-rays interacting with the electrons of the crystalline material.’ Most refinements are based on a decades-old approximation called the Independent atom model. This model assumes atoms to be separate, non-interacting spheres. However, electrons are not just centred around the atom, but are also involved in chemical bonding, so this is an over-simplification. Using the Independent atom model can lead to inaccuracies in the crystal structure as it assumes incorrect electron positions. NoSpherA2 considers electrons involved in bonding too, and doesn’t assume atoms are spherical, by using non-spherical structure refinement. This allows NoSpherA2 to produce crystal structures with improved accuracy. Modelling non-sphericity can also provide deeper insights into intra- and intermolecular chemical bonding, which is important in fields such as catalysis and drug design.

The team demonstrated that NoSpherA2 can successfully refine structures that have not been possible to refine previously using Hirshfeld atom refinement, unveiling unknown intricacies in crystal structure and chemical properties. Representative compounds were chosen as examples of three compound classes, namely disordered structures, structures in highly symmetric space groups with special positions, and structures with heavy elements next to very light elements.

The team used a CO2-hydroquinone clathrate as an example of a structure with occupational disorder, whereby part of the crystalline compound is not present in every unit cell. They were able to precisely determine the occupancy of the carbon dioxide, in addition to all hydrogen atom positions. ‘It is absolutely vital to know where [hydrogen atoms] are in the field of crystal engineering, but also in biology and biochemistry,’ comments Puschmann. The team was also able to successfully refine a tetrahydropyrido[2,3-b]pyrazine derivative, a compound of interest in drug development, which displays conformational disorder – in which different conformations are spatially overlaid in the crystal structure. 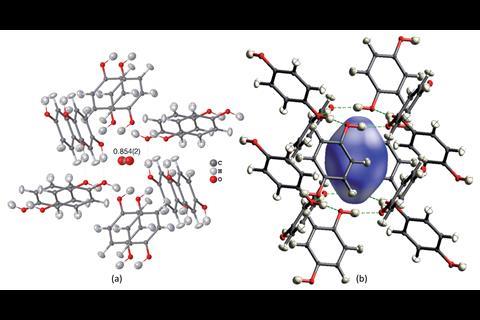 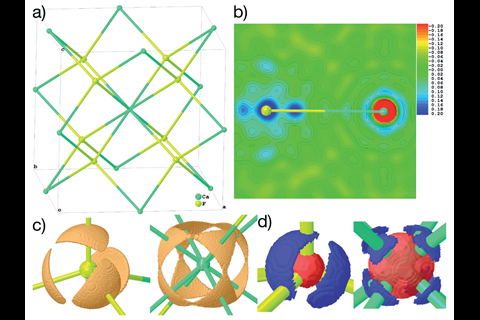 The textbook notion that fluorite consists of spherical ions has rarely been questioned, until now 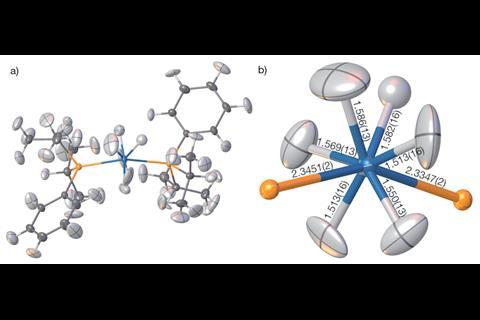 The researchers then implemented NoSpherA2 to refine calcium fluoride, CaF2, for the first time using Hirshfeld atom refinement. Calcium fluoride is often listed as a textbook example of an ionic salt with spherical ions. However, the team found significant non-spherical, bond-directed valence density in the crystal structure that seems to contradict this notion. ‘So it really is direct experimental evidence that calcium fluoride is maybe not what people thought it was,’ comments Puschmann.

Refining hydrogen atom parameters in heavy metal hydrides is notorious for being one of the trickiest aspects of x-ray crystallography, as the heavier element can dominate the diffraction pattern. Absorption and radiation-damaging effects in the experimental x-ray diffraction data can also hamper attempts at obtaining accurate crystal structures in such compounds. The scientists were able to refine the osmium-based compound bis(diisopropylphenylphosphine) hexahydridoosmium and determine Os–H bond distances with higher accuracy than bond distances obtained using the Independent atom model. ‘X-rays haven’t normally got a chance of seeing [the hydrogen atom], but now we can, unambiguously,’ says Puschmann.

‘This study describes an interesting improvement on the current Hirshfeld atom refinement procedure in Olex2, which makes it more general and applicable to a greater variety of crystallographic problems,’ notes Louis Farrugia, an honorary research fellow at the University of Glasgow, UK, whose research interests include software for chemical crystallography. ‘The researchers give some examples of challenging cases where there is perceptible improvement over IAM refinement. Hopefully this new software will enhance the awareness of aspherical atom refinements and make them more generally available to the larger crystallographic community.’

Larger structures will require additional computing power, which is a potential limitation of NoSpherA2. In future, the researchers envisage sending calculations from the NoSpherA2 graphical user interface to a supercomputer infrastructure for further speed gains.