Researchers have for the first time ’watched’ in real time single molecules of catalyst participating in a reaction at a solid-liquid interface. The work presents unique information into the way that certain reactions occur at the single-molecule level and could provide new insights into the design of catalysts.

Johannes Elemans of Radboud University Nijmegen in the Netherlands and colleagues used scanning tunneling microscopy (STM) to observe porphyrin molecules catalyse the oxidation of an alkene to an epoxide.

Elemans and his team deposited a layer of manganese porphyrins - large, flat organic molecules possessing a single manganese atom at the centre - onto a gold surface. The researchers noticed that in the presence of molecular oxygen, the characteristics of adjacent pairs of porphyrin molecules changed - showing up as clear bright spots in the microscope, with each molecule evidently acquiring a single atom of oxygen. 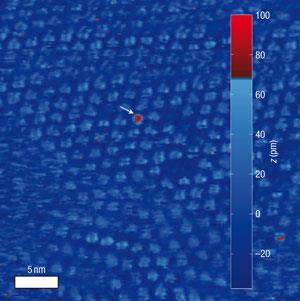 The clean and highly defined STM images indicate a nearly uncontaminated interface; however, occasionally, a porphyrin with a much higher apparent height was observed (white arrow)

When an alkene is introduced to the system the porphyrins transfer the oxygen to the alkene to form an epoxide, leaving the porphyrin to participate in another cycle of catalysis. The researchers were able to take STM ’snapshots’ of the reaction throughout the process.

The team postulates that by binding to the gold surface, the manganese centre of porphyrin becomes reduced and is able to split molecular oxygen into two atoms, which become distributed between pairs of adjacent porphyrins and are then available for catalytic transfer to the alkene.

In a commentary accompanying the research, Simon Higgins and Richard Nichols of the University of Liverpool, UK, say that the ability of Elemans’ team to capture high-resolution snapshots of these events at the molecular level represents a breakthrough that offers ’new molecular-level insights concerning the mechanism of this reaction.’

They add, ’It is clearly exciting that catalytic reactions on surfaces can be imaged under ambient laboratory conditions.’ Higgins and Nichols point out, however, that to follow other such reactions in real time, the rate and turnover of the reactions must tally with the maximum rate that images can be obtained by STM. ’This consideration is likely to limit the number of ambient reactions that can be meaningfully studied with this technique, at least at this stage,’ they say.