A supported recyclable catalyst with excellent activity and selectivity.

A supported recyclable catalyst with excellent activity and selectivity.

Italian scientists have been supporting the reuse of their hydrogenation catalysts to great effect, in an attempt to address the main raison d’Être for heterogeneous catalysis research - developing heterogeneous systems able to match the performance of their homogeneous counterparts but with the bonus of easy catalyst recovery.

Pierluigi Barbaro, from the Istituto di Chimica dei Composti OrganoMetallici, in Florence and his colleagues have developed a supported chiral phosphine rhodium hydrogenation catalyst able to be reused several times without significant leaching. They show that the readily available cation-exchange resin DOWEX 50WX2-100 is a suitable support for hydrogenation of prochiral alkenes, and the process of anchoring the catalyst onto the support is relatively easy - simply stir the catalyst with a lithiated form of the resin. 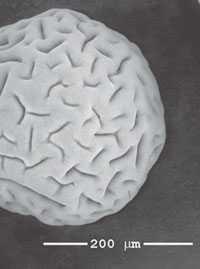 Barbaro and colleagues have obtained enantiomeric excesses of 73 per cent in the hydrogenation of methyl ( R)-3-hydroxybutyrate (using hydrogen gas), which matches the homogeneous system. Use of the probe substrate, methyl 2-acetamidoacrylate gave enantiomeric excesses as high as 99.9 per cent. Barbaro notes that the second use of the supported catalyst shows a drop in activity due to reduction of the ligands on the rhodium complex. However, subsequent uses show little change in activity and that the support does not degrade during hydrogenation. By simple filtration and washing with methanol, the catalyst is easily reused with negligible leaching (less than two per cent) of catalyst from the support.

Commenting on the work Duncan Macquarrie from the Green Chemistry group at the University of York, UK, said ’The development of cleaner routes to key chemical intermediates is one of the most important things a chemist can do. Heterogenising homogeneous catalysts has the advantage of making recovery of the catalyst simpler and cleaner. The chances of recycling the catalyst (with clear economic benefits too) are also improved. Especially in the case of expensive metals and chiral ligands which may be even costlier. However, this is not a trivial matter, and activity and selectivity can be lost on attaching the catalyst to a support. Loss of small amounts of metal to the solution can also make the strategy worthless. In this case, all of the above criteria have been met, and this is an excellent (and rare) example of a heterogeneous, stable, recyclable catalyst with excellent activity and selectivity’.