Resistance to malaria drugs poses a serious problem in countries where the disease is endemic. But researchers in the US have now reported the synthesis of a hybrid molecule that combines chloroquine, a prime therapy before the evolution of drug resistance, with a molecule that reverses resistance.

The new molecule has been tested in vitro with ’remarkable’ results, said chemist David Peyton at Portland State University, Oregon, US. Early studies in a mouse model are also showing promise for the future, he added.

’The benefits of chloroquine are simply too strong to abandon,’ Peyton told Chemistry World. The drug has been especially effective for the people most at risk of dying from malaria - young children and pregnant women. Developing a completely new drug with that audience in mind is ’very, very hard,’ he said.

Malaria is associated with an estimated 300 million clinical cases worldwide each year, causing almost one million deaths. One species of malaria parasite, Plasmodium falciparum,accounts for 80 per cent of all human malarial infections and 90 per cent of deaths.

Chloroquine was the first pharmaceutical line of defense against malaria for 50 years, but the evolution of chloroquine-resistant P. falciparum - reported in practically all countries of Africa and many in Asia - has rendered it next to useless in those regions.

P. falciparum parasites hitch a lift inside mosquitoes, and enter the human blood stream when the insects bite their victims. The parasites grow inside human red blood cells, eating up the cells’ contents with the help of their so-called digestive vacuoles. This vacuole is where many antimalarial drugs, including chloroquine, act, and resistant parasites have evolved to eject drugs like chloroquine through their digestive vacuoles.

Several molecules are known to reverse this ejection process, and the molecular segment responsible - the pharmacophore - has previously been found to include a pair of aromatic carbon rings, often with an aliphatic nitrogen atom close by.

Peyton and colleagues say they have connected one such pharmacophore to a chloroquine molecule for the first time. They call the hybrid molecule a ’reverse chloroquine’ (RCQ). 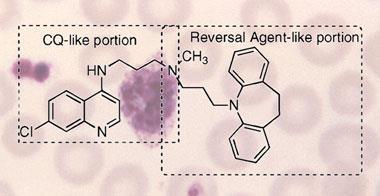 ’We have designed our chemistry to be relatively simple, and amenable to large-scale synthesis,’ said Peyton, noting that any drug used principally in developing countries must be inexpensive. ’We have designed the RCQs to have no chiral centres, simplifying syntheses and regulatory approval.’

The drug will probably be more expensive than chloroquine on a per-gram basis, he concedes. But his RCQs appear effective at doses an order of magnitude lower than those of plain chloroquine. ’If the RCQ costs ten times as much to make as does CQ, but the patient takes one tenth the amount, then the cost is about the same, and side effects would be lowered as a bonus.’

The fact that the drug appears effective on such a small scale is a step in the right direction, said Pascal Ringwald, medical officer with the Roll Back Malaria partnership, established by the World Health Organisation, Unicef, the World Bank and the UN Development Program.

Although there have been previous efforts to reverse drug resistance in this way, the agents were only effective at much higher doses, rendering them toxic. Peyton said he is working to reduce the dose they had used in mice, and hopes to run further animal trials by mid-autumn.

Human trials are even further away. ’There is a long way to go,’ said Ringwald. ’There are a lot of promising starts in animal models [that do not succeed in humans],’ he warned.

Screening a library of known drugs is beginning to turn up unexpected benefits.