The first hybrid gel that is responsive as well as robust has been made by scientists in the UK. 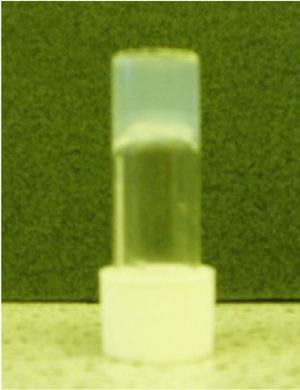 We encounter gels on a daily basis in food, cosmetics and pharmaceuticals. Some gels are very responsive – something can happen to them and they will break down. Some gels are very robust and can survive a lot of stress. Often when a responsive gel responds to a stimulus it breaks down so it is no longer a gel you can do anything with. ‘That’s useful in itself, but you don’t always want that,’ says David Smith whose team at the University of York have developed the new responsive and robust gel.

Smith’s gel cleverly harnesses the characteristics of agarose and a modified dibenzylidene-D-sorbitol (DBS–CO2H) to make the proof-of-principle gel. Synthesis of the gel begins with cooling a hot solution of agarose – the agarose part of the gel forms on cooling. Then the DBS–CO2H is added at high pH. DBS–CO2H does not form a gel at high pH, it only forms a gel once the pH of the system is lowered. What results is a strong gel – the agarose maintains the overall integrity of the material – that also has a supramolecular network capable of pH triggered breakdown and reassembly – courtesy of the DBS–CO2H.

Anne McNeil who develops stimuli responsive materials as part of her research at the University of Michigan in Ann Arbor, US, says although the concept of a hybrid polymer/molecular gel is not new, what distinguishes this work is that the polymer and molecular gel are formed independently and with different triggers (temperature versus pH). As a result, the scientists could trigger molecular gel formation and destruction, all without influencing the polymer gel network. ‘I am curious to see what new applications will arise from these materials,’ she adds.

‘One can imagine that this could be extraordinarily useful for modulating the structure and rheology of gels in unique ways that would benefit drug delivery or tissue engineering applications,’ says Eric Furst, a soft matter expert at the University of Delaware in Newark, US.

Smith also sees smart gels being used in tissue engineering and envisions a system that supports growing cells whilst also responding to changes as the cells grow.