Researchers in the US and Canada have combined mass spectrometry with a technique called flow cytometry to follow dozens of biochemical markers on individual cells simultaneously. The method, which has been termed mass cytometry, will allow scientists to interrogate particular cell types and observe how they respond to different chemical environments, such as drugs, in unprecedented detail. 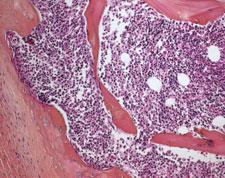 Flow cytometry has been used by cell biologists for many years to detect particular features in single cells. ????Cells are exposed to fluorescently labelled antibodies that target specific proteins and then passed through a device that forces them into single file, where laser-based detection systems can identify if the antibody - and hence the protein of interest - is present or not depending on whether the given dye lights up. The number of proteins on a cell that can be targeted simultaneously is typically limited to less than a dozen because of crowding of the visible spectrum.

Now, a team led by Garry Nolan at Stanford University in California has used a mass spectrometry technique developed by Scott Tanner at Toronto University in Canada to vastly increase the number of proteins that can be targeted. Rather than tag the antibodies with fluorescent dyes, the researchers have used isotopes of rare earth elements. The cells are incubated with the isotope-labelled antibodies before being passed through the flow cytometer. At the point that the cells are separated, they are vaporised in a plasma at 5500K and time-of-flight mass spectrometry is used to detect the presence of the isotope. The system delivers a sharp and unambiguous signal for each isotope detected, enabling a large number of signals to be distinguished.

’We think we will be able to analyse around 80 proteins simultaneously, enabling us to gain up to 100 times more information from a single sample than is currently possible,’ says Nolan. The system would be able to pinpoint biochemical differences between healthy and diseased cells, says Nolan, or track the response of particular cell types to the presence of a drug in unprecedented detail.

James Elliot, head of the UK Medical Research Council’s flow cytometry unit, says that the new approach represents ’a radical departure in the way that complex cellular analysis can be approached’. Elliot adds, ’The technique is still in its infancy and it remains to be seen whether mass cytometry allows the sensitivity of detection afforded by traditional approaches and whether many labs will have the bioinformatics infrastructure to fully mine the huge amount of data that can be generated, yet this advance is truly exciting.’