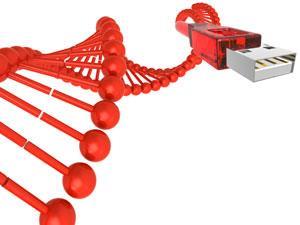 Researchers in the US have engineered DNA in a living cell to act as a rewritable memory storage module. This can form the basis of a digital memory system, the scientists suggest, with the cell being able to 'record' transient changes in its internal chemistry. If multiple DNA switches could be operated simultaneously, each responding to a different set of inputs, complex cellular processes, such as differentiation or cancer development, could tracked simply  using a few DNA switches.

Drew Endy and colleagues at Stanford University engineered a gene sequence containing a section of DNA that can exist in two opposite orientations - each giving rise to a different gene product - and incorporated it into cells of the bacterium Escherichia coli. A separate strand of DNA was incorporated into the cells, containing the genes for two enzymes derived from viruses - integrase and excisionase. The cells were engineered to produce a red fluorescent protein in their 'normal' state. When the chemical chloramphenicol is added to the cell culture, this triggers the production of integrase, which attaches to the invertible DNA sequence and flips it. In this orientation, the new gene sequence produces a green fluorescent protein. However, if the sugar arabinose is added, this induces the production of both integrase and excisionase - which together act to flip the DNA sequence back to its original state, restoring the production of the red protein.

'You can go back and forth between the two states many times,' says team member Jerome Bonnet. 'The system now has memory - it can store information about a transient signal.'

The flipping of DNA to record a signal is not new. However, the fact that the new system is rewritable provides a crucial advantage, says Bonnet. In a simple 'linear' system, to record, say, 200 signals, 200 'bits' of memory would be needed. However, in a system where each switch can exist in one of two states, this markedly reduces the number of switches needed. If each switch can occupy two positions - 0 or 1- in combination, only eight switches could provide 256 permutations, or individual signalling events.

Pierluigi Frisco, an expert in biological computers at Heriot Watt University in the UK, says: 'More than the reported results, what I found most interesting in this paper are the ways in which the authors solved the problems they experienced along the way. As they themselves indicate there are no tools providing qualitative control over switchable gene expression. The authors had to create such tools for their experiment but the use of these tools appears to have greater applicability than in this particular experiment.'