A fresh chink in the biochemical armour of bacteria has been found by scientists studying how an antibiotic, first identified in the 1950s, attacks cells.

The researchers report that the antibiotic shuts down the bacteria’s management of an essential amino acid, highlighting a previously unexploited weakness in a range of bugs, including anthrax, that could be targeted by drugs, they claim.

This bacterial Achilles’ heel is a recently-discovered RNA structure called a riboswitch, which regulates protein production. When the protein in question reaches a sufficiently high concentration, it triggers the riboswitch to halt further production. One such riboswitch controls how the amino acid lysine is used in the cell.

Ronald Breaker, of the Howard Hughes Medical Institute, Chevy Chase, Maryland, US, and his team, has now found a way to fool the riboswitch into halting lysine metabolism. They gave the bacterium Bacillus subtilis a dose of L-aminoethylcysteine (AEC) - an analogue of lysine - persuading the riboswitch that no more lysine was needed by the cell. Since the bacteria cannot use AEC in place of lysine, they soon run short of this vital biochemical building block.

Fifty years ago, separate research groups had found that analogues such as AEC were effective antibiotics. But they didn’t know why. Identifying their mode of action is helping Breaker’s team exploit the same weakness with other amino acid analogues. 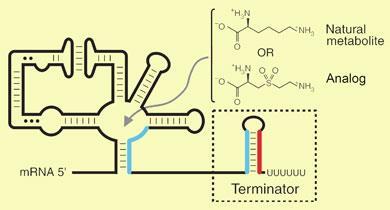 Clinical applications are still a long way off, he cautioned. ’We can validate riboswitches as drug targets and we can examine the molecular recognition characteristics of their metabolite-binding pockets, but one will still have to address how the compounds get into bacteria or are tolerated by patients,’ Breaker told Chemistry World.

But ’if a sufficiently large collection of compounds that mimic riboswitch ligands is tested, compounds with the right mix of properties will be found,’ he said.

The work marks ’an interesting proof of principle for riboswitches as drug targets,’ commented Beatrix S??, who works on RNA aptamers at the University of Erlangen, Germany. Riboswitches make promising targets, she said, because almost all known riboswitches are bacterial, and they bind with extremely high specificity.

Breaker has founded a company called BioRelix to discover and develop antibiotics, such as amino acid analogues, that target pathogens resistant to currently available drugs. In unpublished work sponsored by the US Defense Advanced Research Projects Agency (Darpa), he has identified a riboswitch class that can be exploited to kill Bacillus anthracis (anthrax).