Rise of the micro machines

Microjet engines called microbots that can transport cells within a fluid to any desired location have been developed by German scientists.

Manipulating nanomachines to transport biological matter in the body has been a challenge until now. Samuel Sanchez from the Institute for Integrative Nanosciences in Dresden and colleagues have shown that by using a magnet, it is possible to navigate a microbot towards a specific cell within the body, pick it up from point A and transport it to point B.

Taking their inspiration from Mother Nature, the team looked at existing biological motor proteins - flagellae, which are tail-like projections that protrude from certain cells to help them move independently, and kinesin, a more complex motor protein found in eukaryotic cells that aids cell movement during mitosis and meiosis. Both are powered by chemical fuel and produce mechanical energy. 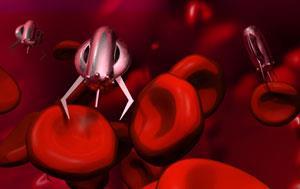 By using a magnet, it’s possible to navigate microbots towards specific cells, pick them up from point A and transport them to point B

Sanchez’s team was able to transport multiple micro-objects in fluid, such as colloidal microparticles and metallic nanoplates. They had also reduced the toxicity of the peroxide fuel using the enzyme catalase, which breaks down the peroxide and releases oxygen bubbles that propel the microbots. ’The next step was to demonstrate that our microbots can transport biological material such as cells,’ explains Sanchez.

To do this, the group made small machines made up of hollow tubes containing a thin layer of platinum on the inside. They found that the machines moved independently in a peroxide solution when controlled externally by a small magnet manipulated with a joystick. The microbots can be directed towards suspended cells in solution, where they suck them up through the tube and transport them to the desired location. They released the cells from the tube by rapidly turning the magnet.

’This groundbreaking discovery by the Sanchez group opens up new avenues for highly important biomedical and bioengineering applications,’ comments Martin Pumera, an expert in nanotechnology and microfluidics at Nanyang Technological University, Singapore. ’It is truly a dream come true.’

Sanchez and his team hope that in the future their microbots could perform visionary tasks within the body. ’I would like to see our microbots swimming inside the bodies of animals, delivering drugs to required locations, for example, in the vicinity of cancer cells or replacing diseased cells with healthy ones.’