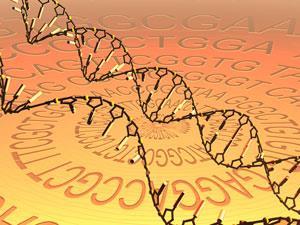 US scientists have taken another step towards the goal of creating self-replicating molecules like those thought to have spawned life on Earth. The researchers made RNA-like polymers capable of copying short sections of genetic code that they suggest could act as genomes in synthetic cells.

When life began, the cellular machinery for copying DNA had not yet evolved. So, as the theory goes, the first information-carrying molecules must have been self-replicators. Making self-replicators in the lab has proved difficult, although scientists have had some success using RNA molecules that are also enzymes capable of catalysing their own replication. The new study, however, led by Jack Szostak at Massachusetts General Hospital in Boston, US, focuses on another type of system – one that works without enzymes.

Although the system only replicates a sequence of four bases, it makes use of a chemical modification to address what Philipp Holliger of the MRC Laboratory of Molecular Biology, UK, calls a ‘big stumbling block’ for self-replicating systems: copying accuracy. Copying depends on matching adenine–thymine (A-T) and guanine-cytosine (G-C) base pairs, so mismatches such as G–T lead to errors in the transmission of the genetic code. But Szostak’s tweak – replacing T with thio-T – increases A-T stability and, crucially, the copying accuracy.

It’s not clear why thio-T makes A-T more stable, but the fact that it does raises further questions about the evolution of the genetic code. ‘You have to give an answer as to why these [modifications] were dropped,’ says Vitor Pinheiro, a synthetic biologist at the Institute of Structural and Molecular Biology, UK. Ignoring that difficult question for now, the tighter pairing also helps to increase the rate of copying – another stumbling block along the way to Szostak’s synthetic cells.

There are, though, plenty more problems left to solve. Szostak himself listed a whole host of problems for his enzyme-free self-replicators in a recent review. ‘They’re taking them down one by one,’ says Holliger. ‘Hopefully at the end of it, you’ll be able to put all this together into a system that could truly perform self-replication. And that would obviously be a spectacular thing.’