Researchers from the US and Japan have directly observed the ring of a rotaxane molecule shuttling along its spindle. The observation provides direct and compelling evidence that the rings of rotaxanes - which consist of a mechanically interlocked macrocycle encircling a dumbbell-shaped thread - can slide along the threads in response to a stimulus. The researchers also showed that the behaviour of the rotaxane is influenced by its molecular environment, something that is certain to be significant if the molecules are to be used as molecular machines.

Rotaxanes have been stubbornly resistant to direct observation by microscopy because they tend to twist and squirm on a surface. However, a team led by Fraser Stoddart of Northwestern University in Illinois, and Paul Weiss of the University of California, Los Angeles, succeeded in pinning the two ends of the dumbbell portion of a rotaxane to a gold surface by attaching disulfide groups to the ends. The researchers could then pinpoint the protruding ring portion of the molecule with a scanning tunneling microscope.

The thread of the molecule contains two ’stations’ - functional portions with which the ring associates depending on conditions. One station, tetrathiafulvalene (TTF), attracts the ring when the station is in a neutral state but repels it when it is reduced. The team was able to electrochemically switch the redox state of the TTF station and observed the ring ping from one station to the other (in this case, 1,5-dioxynaphthalene (DNP)) in response. 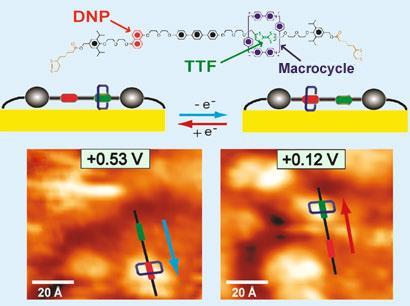 ’Getting these single molecule images was a big step, but what was more interesting was when we increased the field of view of the microscope and watched several molecules,’ says Weiss. By doing this, the team could see that different molecules behaved differently depending on a range of circumstances. ’We could see that the ring moves differently depending on how stretched the thread is, for example,’ Weiss says. ’Also, neighbouring molecules can interfere with each other. These things are all important if we want to understand how to assemble these and other molecules so that they function cooperatively.’

Lee Cronin, who researches complex chemical systems at the University of Glasgow in the UK, says, ’In some respects this is a landmark study because they have obtained direct observations of electrochemically controlled shuttling in a rotaxane molecule. While many people assumed that the molecule would behave in this way, others have raised questions. I think this elegantly devised experimental AFM study provides compelling evidence - seeing is believing!’