Science behind caramel isn’t as sticky as we thought 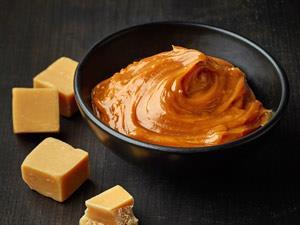 Researchers in the UK have suggested that caramel has a similar structure to rubber after studying how its composition affects how it flows. Despite the complexity of the sticky sweet, the team found a common model from polymer science fits the viscoelastic behaviour of caramels.

‘Many soft matter scientists study foods, but many would focus on individual ingredients,’ explains the project’s principal investigator Wilson Poon from the University of Edinburgh. This is partly because scientists had assumed that the actual foods themselves were too complex for soft matter approaches. Despite caramel’s popularity in confectionary, research has never systematically probed its rheology, or flow, at different compositions.

After determining the different proportions of milk proteins, sugars and water that yield caramel when combined with fat, Poon’s group performed rheometry measurements and found that the viscoelastic spectra of all their caramels could be shifted onto a single master curve. The form of the curve suggested a rubber-like network of cross-linked milk protein polymers, with embedded fat droplets as fillers. ‘I was not expecting to find a rubber-like material that is rubber-like in its flow properties,’ comments Poon, who was even more surprised to uncover a universal underlying behaviour over such a large range of compositions.

The findings have excited food scientists. Eric Dickinson, from the University of Leeds, UK, was impressed by the new level of understanding the team obtained ‘without computer simulations, looking down a sophisticated microscope, or scattering some kind of radiation.’ And David McClements, from the University of Massachusetts, US, thinks the work will ‘greatly facilitate the development of analytical methods for characterising the desirable textural properties of caramels,’ as the model can predict caramel properties using only two parameters – complex shear modulus and frequency.

Poon hopes that his work will whet other soft matter researchers’ appetites to study entire food systems. ‘Simplicity is there to be found in what looks like a forest of complexity,’ he adds.