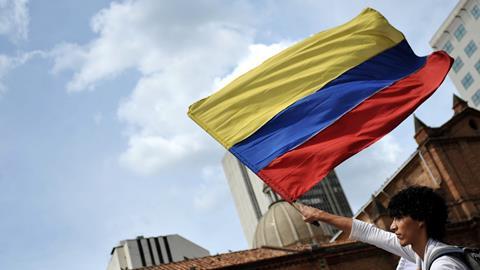 Scientists across Colombia are welcoming proposed reforms. The Colombian government did little to prioritise science until a peace treaty in 2016 ended a 50-year conflict between the government and rebel FARC guerillas, and now the country’s Congress is on track to boost constitutional protections for research and development (R&D) funding and ensure less of that money is lost to administrative costs.

Colombia currently invests only 0.24% of its GDP in R&D, with much of that money coming from royalties paid to the Colombian government by petroleum-extracting or mining companies, according to United Nations figures. By contrast, the UK and the US invest 1.69% and 2.74% of GDP in R&D, respectively.

The nation’s royalty-funded Science, Technology and Innovation Fund (FCTeI) is worth COL$2.1 trillion (£513 million) in the current 2019/2020 round, according to Colciencias, Colombia’s main government agency in charge of distributing science funding. From the FCTeI’s inception in 2012 until June 2019, 378 projects totaling £733 million have been financed across Colombian region-level governments.

Currently, 10% of Colombia’s resource royalties are allocated to support R&D, with this proportion protected by the country’s constitution, explains José Rocha, an expert in science and technology management and law at the University of Antioquia in Medellín. However, 0.5% of that 10% allocation is currently going to administrative costs, according to Ivan Dario Agudelo Zapata, a member of Colombia’s Senate who is championing congressional reforms that would ensure the full 10% supports science funding. The measure under congressional consideration aims to pre-empt any attempt by the current or future governments to weaken or circumvent the existing constitutional safeguards for science support.

‘We are putting our house in order,’ Agudelo says. ‘These reforms show a commitment by the government and Congress to the constitutional protection of the funding.’ He points out that Colombia has more natural resources than many of the nations that have successfully transformed their economies and are prosperous. ‘If you look at the richest countries in the world, their top companies are driven by science and technology – that’s where we need to get to.’

The proposed reforms are halfway through the legislative process, with Congress having completed four of eight debate rounds, and they are expected to pass, Agudelo says, because they have wide support across the political spectrum.

In fact, Colombian President Ivan Duque has made science and technology a priority, authorising the creation of the country’s first science ministry in December 2018 and establishing a new science brain trust – dubbed the Mission of Sages (Mision de Sabios) – which is expected to chart out the country’s long-term strategy for Colombia’s scientific agenda by the end of the year.

Fanor Mondragon, a chemist and member of the Colombian Academy of Exact, Physical and Natural Sciences, notes that despite having an abundance of various natural resources, Colombia’s chemical industry remains fairly undeveloped.

‘Now there is a possibility to enhance our own development, to give the country the possibility of having its own chemical industry,’ Mondragon states. If Colombia’s Congress approves the reforms in question, this will protect science funding, reinforcing the sense that ‘the stars are aligned’ for Colombian scientists, including its chemists, he says.

Julien Wist, a chemist who directs Universidad del Valle in Cali’s technology transfer office, says that Colombian chemists will finally be able to propose well-structured research projects with improved outcomes, after years without national and strategic planning. ‘Progressive and continuous funding strategies are a must in order to get results and impacts from investments in research,’ he adds.

Colombia is not the only South American country currently grappling with how to up its research and innovation funding. Chile, for example, appointed its first science minister last year. That nation, which is significantly more prosperous than Colombia, only spent 0.38% of its GDP on R&D in 2018.

Meanwhile in Brazil, the government announced a funding freeze earlier this year affecting, among other things, its Ministry of Science, Technology, Innovation and Communication. In 2019, that ministry’s budget was slashed more than 40% to its lowest level since 2006. Indeed, media reports indicate that the austerity measures of Brazilian President Jair Bolsonaro are leading to a ‘brain drain’ of scientific talent from the country to Europe and the US.