New toxicity results show that foams would be safer than the currently used clays as materials to stem blood flow in open wounds.

Blood loss is one of the leading causes of death in both military and civilian casualties. Currently, aluminosilicate layered clays, such as kaolin clay, are used as haemostatic agents (agents that encourage the blood to clot) in dressings to prevent fatalities. These clays have varying degrees of cytotoxicity and can be difficult to remove from wounds, which can lead to thrombosis. Recently, one clay product has been removed from use for this reason.

Now, scientists in Singapore and the US, led by Daniele Zink from the Institute of Bioengineering and Nanotechnology in Singapore and Galen Stucky from the University of California, Santa Barbara, have found, using in vitro tests, that a silica mesocellular foam (MCF-26) is 1–2 orders of magnitude less toxic to human cells than the clays, whereas its potency in promoting blood clotting is similar. 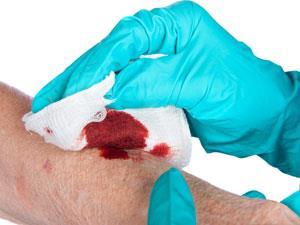 ‘MCF-26 would be effective and safer than currently used haemostatic agents,’ says Zink. She adds that the clay particles in their tests to compare the two materials adhered to cell surfaces and were taken up into the cells’ cytoplasm. The MCF-26 was not taken up and was easy to remove.

Santiago Gómez-Ruiz, of the Universidad Rey Juan Carlos, Spain, and an expert in biocompatible materials and cytotoxicity, says that the work shows mesocellular foams to be an interesting real alternative to current haemostatic agents. ‘The properties of MCF-26 presented here open up the opportunity to further explore its behavior in vivo,’ says Gómez-Ruiz, although he expects this to be a difficult job.

Stucky also anticipates further work on the material, including ‘total cardiovascular system studies on specific organ and circulatory residence times of the MCF-26 particles, and their biodegradation and body elimination profiles’.