US researchers have explained the chemical trick behind Salmonella bacteria’s ability to outgrow other microbes living in the gut. The findings could lead to new drug treatments for the bacterial infection.

Salmonella is a pathogen which causes severe inflammation and diarrhoea - also known as gastroenteritis. During inflammation the bacteria experiences a population surge, outgrowing other intestinal microbes. Researchers have previously been unable to explain this phenomenon, but Andreas B?umler from the University of California, Davis, believes he has found the answer.

’We were interested in the mechanisms that Salmonella can use to outgrow other microbes,’ says B?umler, ’and one of the things that has been used traditionally for enriching Salmonella is tetrathionate’. Tetrathionate (S4O62-) encourages growth, as Salmonella is able to use it as an electron acceptor for respiration. However researchers believed this mechanism was not important in vivo, as there are no natural sources of tetrathionate. 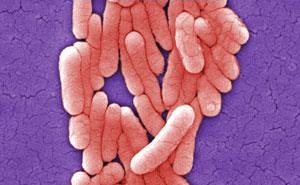 B?umler  and his team found this in fact was not the case. Using high performance liquid chromatography and mass spectrometry they detected tetrathionate in the intestines of animals infected with Salmonella. Normally, microbes in the gut produce toxic hydrogen sulfide, which the body converts to harmless thiosulfate. When Salmonella infects the body, it causes inflammation and triggers the release of neutrophils, cells which destroy bacteria by releasing oxygen radicals. But as well as killing bacteria, these radicals also oxidise thiosulfate to tetrathionate.

’All the other microbes have to rely on fermentation, which is a very inefficient way of gaining energy and growing,’ says Sebastian Winter, from the team. ’But Salmonella can now use tetrathionate as an electron acceptor and can respire in this totally anaerobic environment.’

This mechanism is crucial for Salmonella to increase its chances of transmission to other hosts. ’It’s interesting that Salmonella actually uses the inflammatory response to grow,’ says Samuel Miller, a microbiologist with an interest in Salmonella pathogenesis from the University of Washington, US. ’This shows an important interaction at a chemical level.’

B?umler hopes the research could lead to new treatments against the bacteria. ’You could reduce the sulfur compound in the intestine to shorten the duration of the disease,’ he says.