Salt crystals can grow tiny legs to lift themselves away from certain hydrophobic surfaces, chemists from the Netherlands were surprised to find. This self-lifting behaviour could have implications for designing building materials that avoid damaging salt crystal growth.

White salt residues are often seen on brick or concrete structures. This efflorescence is caused by salty water migrating to the porous materials’ surface, where the water evaporates, leaving the salt behind. The process is unsightly at best and destructive at worst. Anti-efflorescence surface treatments, for example, can prevent salt escaping the stone, making it crystallise internally instead.

Although sodium chloride is the most common salt on Earth, little is known about how surface treatments affect its crystallisation dynamics. A team around Noushine Shahidzadeh from the University of Amsterdam has for the first time observed how salt crystals grow legs to avoid silanised surfaces.

The researchers placed salt water droplets on a heated, trichlorooctylsilane-treated glass slide. As the water evaporates, crystallites form at the water–air interface, sitting on their corners to minimise contact with the surface. As the evaporation proceeds, a number of tiny crystalline legs grow on the bottom of the structure, which lifts the entire crystal off the surface. At higher temperatures, more legs grow – and faster. 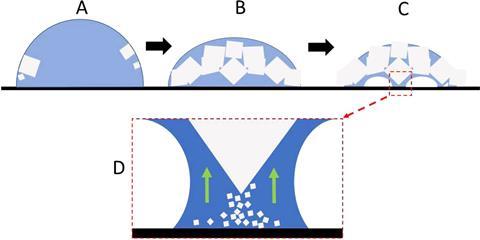 Only on silanised glass, but not on other hydrophobic materials, did sodium chloride show this lift-off behaviour. Shahidzadeh and her team argue that this is because silanised glass is microscopically smooth unlike other silanised superamphiphobic coatings. Moreover, silanes block surface hydroxyl groups so they can’t act as water adsorbing sites, preventing salt nucleation where it usually happens at the water–solid interface.