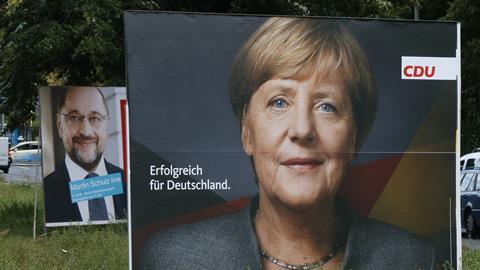 Science fails to make an impact in forthcoming German elections

With German chancellor Angela Merkel’s party coming out on top in all recent polls, an upset in the forthcoming elections on Sunday seems unlikely. But scientists looking for commitments on spending on R&D, however, have been met with often nebulous promises.

Merkel’s conservative Christian Democratic Union (CDU) has been the biggest party in the governing coalition since 2005, and this isn’t expected to change. To gain a parliamentary majority, however, the CDU is expected to need to form a coalition. It is possible that to govern the CDU will once again have to make common cause with Germany’s second largest party, the centre-left Social Democratic Party (SPD).

If this ‘grand coalition’ comes to fruition, the far-right Alternative for Germany (AfD) may become the country’s largest opposition force. Having failed to clear the 5% hurdle – the minimum amount of votes needed to secure any parliamentary seats – during the last election, the Eurosceptic and anti-immigrant party could receive as much as 11% of the vote, according to recent polls.

Both Merkel’s CDU and her competitor Martin Schulz’s SPD promise to increase spending on R&D from 3% to 3.5% of GDP. The CDU also vows to fund R&D in start-ups and small companies with an additional €2 billion (£1.8 billion), and give an extra €6 billion to technology transfer projects. These sentiments are mirrored by the SPD, as well as the other parties likely to gain seats in parliament, although they refrain from specifying the extent of their funding and tax incentives aimed at boosting scientific research.

Although all parties emphasise the importance of international collaboration and dialogue, the AfD wants to pull out of the Bologna process and revert to Germany’s old Diplom and Magister degrees, which were replaced with bachelor’s and master’s degrees 15 years ago.

Both the Greens and the Left parties have vowed to tackle the increasing number of short-term contracts that make it difficult for young researchers to find staff positions, with the latter promising to create 100,000 permanent university jobs. The SPD and the Left are advocating for more basic and curiosity-driven research by making funding less dependent on the potential applications of any research. Germany’s move towards new publishing deals and open access is supported by parties across the political spectrum.

Diversity, on the other hand, seems to be a divisive issue. The AfD wants to end all funding for gender research and opposes events such as equal pay day, while the SPD and the Left advocate a 40 and 50% women’s quota in science, respectively.

On other controversial issues such as genetic modification and homeopathy, parties on opposite ends of the political spectrum are finding common ground, while those that are traditional bedfellows have clashed. Both the AfD and Greens reject genetically modified foods, while the Left wants healthcare to be evidence-based in contrast with the centre-left Greens who pledge to support research into ‘alternative’ medicine.

It’s not just scientists who may feel research has been overlooked by politicians in this election. A survey by the charity Wissenschaft im Dialog found that 65% of the public felt that science and research had not been sufficiently debated during the election campaign.