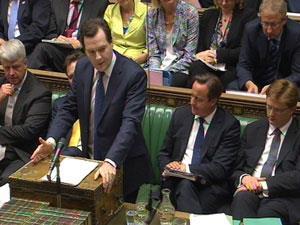 Setting out a spending plan for 2015-16, the UK’s Chancellor George Osborne described investment in science as ‘an investment for the future.’ Osborne announced that the science budget will remain frozen at £4.6 billion in cash terms (a real terms cut) while the capital budget for science will be increased in real terms to £1.1 billion, and then maintained at that level ‘until the end of the decade.’

In total, the Department of Business Innovation and Skills (BIS) which funds scientific research and higher education in the UK, received a 6% cut in resource funding but a 15% increase in capital funding. As well as maintaining resource funding for science BIS will also increase resource funding for the technology strategy board by £185 million. The savings to allow for this increase in funding will come from cuts in further and higher education funding, student maintenance and further departmental efficiencies. For example, the Higher Education Funding Council for England, will be asked to save at least £45 million by ‘reprioritising’ teaching grants.

As other departments were subject to larger cuts, the news was greeted with mixed feelings by the scientific community. ‘The Chancellor was right when he said investment in science is investment in our future,’ says the Royal Society of Chemistry’s President, Professor Lesley Yellowlees. ‘Britain’s world-leading science is central to creating growth and jobs… but we need to see more comprehensive forward-thinking if we really want Britain to stay ahead in the global economic race. Over past decades our government’s investment in research and development has slid towards the bottom of the international rankings – out of our G8 competitors, only Italy spends less as a proportion of GDP.’

‘This is a real terms cut, make no mistake about that,’ says Jenny Rohn, chair of campaign group Science is Vital. While Rohn admits that compared to the cuts other government departments have suffered, BIS has fared less badly, she says the group is disappointed. Earlier this month, Science is Vital, presented a report on the legacy of the 2010 comprehensive spending review, which showed how the ring-fence had affected researchers and called for a reversal in the current decline in funding to avoid seriously damaging the UK’s research base. As inflation further reduces the research budget of researchers, she adds ‘who’s going to run the machines the capital injection buys?’

As this is an interim funding plan up to and beyond the next general election, scheduled for the 7 May 2015, Rohn says her focus now is on continuing to pressure all three main parties to commit to science rather than perpetuating a budget she views harmful. ‘There is a theoretical limit beyond which we won’t be able to recover,’ she concludes. ‘I don’t know how close to that line we are now.’